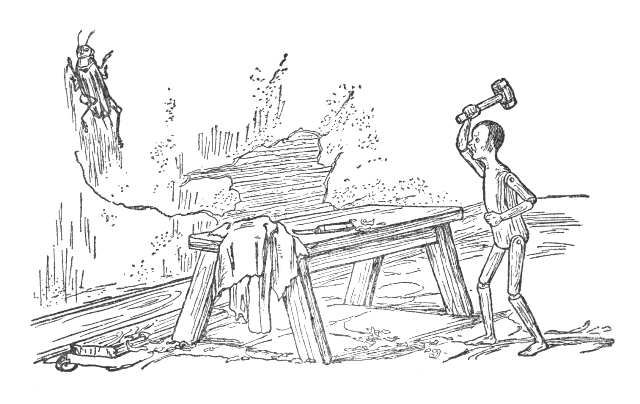 While poor Geppetto was being taken to prison for no fault of his, that imp Pinocchio, finding himself free from the clutches of the soldier, ran off as fast as his legs could carry him. That he might reach home the quicker he rushed across the fields, and in his mad hurry he jumped high banks, thorn hedges and ditches full of water.

Arriving at the house he found the street door ajar. He pushed it open, went in, and having fastened the latch, threw himself on the floor and gave a great sigh of satisfaction.

But soon he heard some one in the room who was saying:

"Who calls me?" said Pinocchio in a fright.

Pinocchio turned round and saw a big cricket crawling slowly up the wall.

"I am the Talking-Cricket, and I have lived in this room a hundred years or more."

"Now, however, this room is mine," said the puppet, "and if you would do me a pleasure go away at once, without even turning round."

"I will not go," answered the Cricket, "until I have told you a great truth."

"Woe to those boys who rebel against their parents and run away from home. They will never come to any good in the world, and sooner or later they will repent bitterly."

"Sing away, Cricket, as you please, and as long as you please. For me, I have made up my mind to run away tomorrow at daybreak, because if I remain I shall not escape the fate of all other boys; I shall be sent to school and shall be made to study either by love or by force. To tell you in confidence, I have no wish to learn; it is much more amusing to run after butterflies, or to climb trees and to take the young birds out of their nests."

"Poor little goose! But do you not know that in that way you will grow up a perfect donkey, and that every one will make fun of you?"

But the Cricket, who was patient and philosophical, instead of becoming angry at this impertinence, continued in the same tone:

"But if you do not wish to go to school why not at least learn a trade, if only to enable you to earn honestly a piece of bread!"

"Do you want me to tell you?" replied Pinocchio, who was beginning to lose patience. "Amongst all the trades in the world there is only one that really takes my fancy."

"And that trade—what is it?"

"It is to eat, drink, sleep and amuse myself, and to lead a vagabond life from morning to night."

"As a rule," said the Talking-Cricket, "all those who follow that trade end almost always either in a hospital or in prison."

"Take care, you wicked, ill-omened croaker! Woe to you if I fly into a passion!"

"Poor Pinocchio! I really pity you!"

"Because you are a puppet and, what is worse, because you have a wooden head."

At these last words Pinocchio jumped up in a rage and, snatching a wooden hammer from the bench, he threw it at the Talking-Cricket.

Perhaps he never meant to hit him, but unfortunately it struck him exactly on the head, so that the poor Cricket had scarcely breath to cry "Cri-cri-cri!" and then he remained dried up and flattened against the wall.