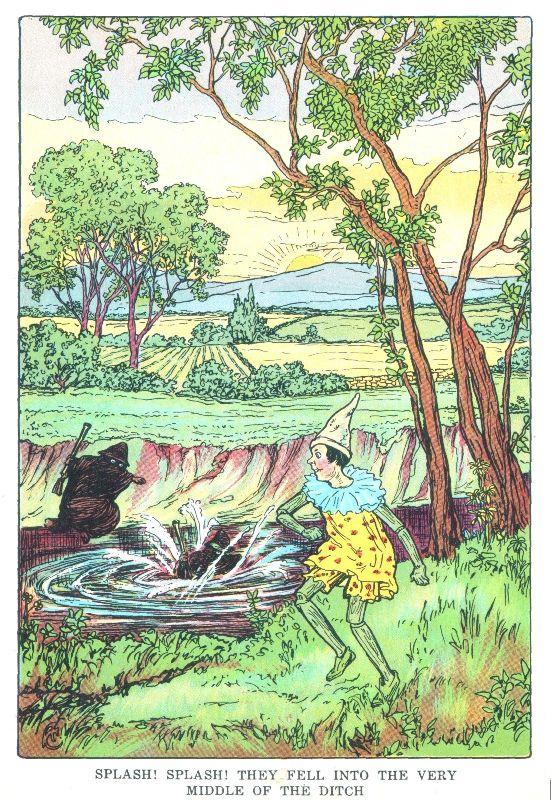 "Really," said the puppet to himself, as he resumed his journey, "how unfortunate we poor boys are. Everybody scolds us and gives us good advice. See now; because I don't choose to listen to that tiresome Cricket, who knows, according to him, how many misfortunes are to happen to me! I am even to meet with assassins! That is, however, of little consequence, for I don't believe in assassins—I have never believed in them. For me, I think that assassins have been invented purposely by papas to frighten boys who want to go out at night. Besides, supposing I was to come across them here in the road, do you imagine they would frighten me? Not the least in the world. I should go to meet them and cry: 'Gentlemen assassins, what do you want with me? Remember that with me there is no joking. Therefore go about your business and be quiet!' At this speech they would run away like the wind. If, however, they were so badly educated as not to run away, why, then I would run away myself and there would be an end of it."

But Pinocchio had not time to finish his reasoning, for at that moment he thought that he heard a slight rustle of leaves behind him.

He turned to look and saw in the gloom two evil-looking black figures completely enveloped in charcoal sacks. They were running after him on tiptoe and making great leaps like two phantoms.

"Here they are in reality!" he said to himself and, not knowing where to hide his gold pieces, he put them in his mouth precisely under his tongue.

Then he tried to escape. But he had not gone a step when he felt himself seized by the arm and heard two horrid, sepulchral voices saying to him:

"Your money or your life!"

Pinocchio, not being able to answer in words, owing to the money that was in his mouth, made a thousand low bows and a thousand pantomimes. He tried thus to make the two muffled figures, whose eyes were only visible through the holes in their sacks, understand that he was a poor puppet, and that he had not as much as a counterfeit nickel in his pocket.

"Come, now! Less nonsense and out with the money!" cried the two brigands threateningly.

And the puppet made a gesture with his hands to signify: "I have none."

"Deliver up your money or you are dead," said the tallest of the brigands.

"Dead!" repeated the other.

"And after we have killed you, we will also kill your father!"

"No, no, no, not my poor papa!" cried Pinocchio in a despairing voice, and as he said it the sovereigns clinked in his mouth.

"Ah! you rascal! Then you have hidden your money under your tongue! Spit it out at once!"

"Ah! you pretend to be deaf, do you? Wait a moment, leave it to us to find a means to make you give it up."

And one of them seized the puppet by the end of his nose, and the other took him by the chin, and began to pull them brutally, the one up and the other down, to force him to open his mouth. But it was all to no purpose. Pinocchio's mouth seemed to be nailed and riveted together.

Then the shorter assassin drew out an ugly knife and tried to put it between his lips like a lever or chisel. But Pinocchio, as quick as lightning, caught his hand with his teeth, and with one bite bit it clear off and spat it out. Imagine his astonishment when instead of a hand he perceived that a cat's paw lay on the ground.

Encouraged by this first victory he used his nails to such purpose that he succeeded in liberating himself from his assailants, and, jumping the hedge by the roadside, he began to fly across the country. The assassins ran after him like two dogs chasing a hare, and the one who had lost a paw ran on one leg, and no one ever knew how he managed it.

After a race of some miles Pinocchio could go no more. Giving himself up for lost, he climbed the trunk of a very high pine tree and seated himself in the topmost branches. The assassins attempted to climb after him, but when they had reached half-way up they slid down again and arrived on the ground with the skin grazed from their hands and knees.

But they were not to be beaten by so little; collecting a quantity of dry wood, they piled it beneath the pine and set fire to it. In less time than it takes to tell, the pine began to burn and to flame like a candle blown by the wind. Pinocchio, seeing that the flames were mounting higher every instant, and not wishing to end his life like a roasted pigeon, made a stupendous leap from the top of the tree and started afresh across the fields and vineyards. The assassins followed him, and kept behind him without once giving up.

The day began to break and they were still pursuing him. Suddenly Pinocchio found his way barred by a wide, deep ditch full of stagnant water the color of coffee. What was he to do? "One! two! three!" cried the puppet, and, making a rush, he sprang to the other side. The assassins also jumped, but not having measured the distance properly—splash! splash! they fell into the very middle of the ditch. Pinocchio, who heard the plunge and the splashing of the water, shouted out, laughing, and without stopping:

"A fine bath to you, gentleman assassins."

And he felt convinced that they were drowned, when, turning to look, he perceived that, on the contrary, they were both running after him, still enveloped in their sacks, with the water dripping from them as if they had been two hollow baskets.