Chapter XXIX - He Returns to the Fairy's House 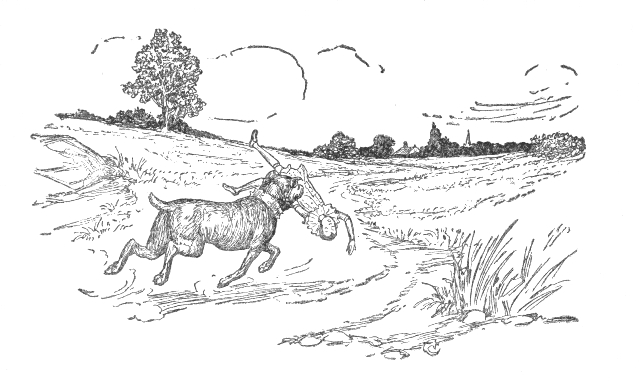 Just as the fisherman was on the point of throwing Pinocchio into the frying-pan a large dog entered the cave, enticed there by the strong and savory odor of fried fish.

"Get out!" shouted the fisherman, threateningly, holding the floured puppet in his hand.

But the poor dog, who was as hungry as a wolf, whined and wagged his tail as much as to say:

"Give me a mouthful of fish and I will leave you in peace."

"Get out, I tell you!" repeated the fisherman and he stretched out his leg to give him a kick.

But the dog, who, when he was really hungry, would not stand trifling, turned upon him, growling and showing his terrible tusks.

At that moment a little feeble voice was heard in the cave, saying entreatingly:

"Save me, Alidoro! If you do not save me I shall be fried!"

The dog recognized Pinocchio's voice and, to his extreme surprise, perceived that it proceeded from the floured bundle that the fisherman held in his hand.

So what do you think he did? He made a spring, seized the bundle in his mouth, and, holding it gently between his teeth, he rushed out of the cave and was gone like a flash of lightning.

The fisherman, furious at seeing a fish he was so anxious to eat snatched from him, ran after the dog, but he had not gone many steps when he was taken with a fit of coughing and had to give it up.

Alidoro, when he had reached the path that led to the village, stopped and put his friend Pinocchio gently on the ground.

"How much I have to thank you for!" said the puppet.

"There is no necessity," replied the dog. "You saved me and I have now returned it. You know that we must all help each other in this world."

"But how came you to come to the cave?"

"I was lying on the shore more dead than alive when the wind brought to me the smell of fried fish. The smell excited my appetite and I followed it up. If I had arrived a second later—"

"Do not mention it!" groaned Pinocchio, who was still trembling with fright. "Do not mention it! If you had arrived a second later I should by this time have been fried, eaten and digested. Brrr! It makes me shudder only to think of it!"

Alidoro, laughing, extended his right paw to the puppet, who shook it heartily in token of great friendship, and they then separated.

The dog took the road home, and Pinocchio, left alone, went to a cottage not far off and said to a little old man who was warming himself in the sun:

"Tell me, good man, do you know anything of a poor boy called Eugene who was wounded in the head?"

"The boy was brought by some fishermen to this cottage, and now—"

"And now he is dead!" interrupted Pinocchio with great sorrow.

"No, he is alive and has returned to his home."

"Not really? not really?" cried the puppet, dancing with delight. "Then the wound was not serious?"

"It might have been very serious and even fatal," answered the little old man, "for they threw a thick book bound in cardboard at his head."

"One of his school-fellows, a certain Pinocchio."

"And who is this Pinocchio?" asked the puppet, pretending ignorance.

"They say that he is a bad boy, a vagabond, a regular good-for-nothing."

"Do you know this Pinocchio?"

"By sight!" answered the puppet.

"And what is your opinion of him?" asked the little man.

"He seems to me to be a very good boy, anxious to learn, and obedient and affectionate to his father and family."

Whilst the puppet was firing off all these lies, he touched his nose and perceived that it had lengthened more than a hand. Very much alarmed he began to cry out:

"Don't believe, good man, what I have been telling you. I know Pinocchio very well and I can assure you that he is a very bad boy, disobedient and idle, who, instead of going to school, runs off with his companions to amuse himself."

He had hardly finished speaking when his nose became shorter and returned to the same size that it was before.

"And why are you all covered with white?" asked the old man suddenly.

"I will tell you. Without observing it I rubbed myself against a wall which had been freshly whitewashed," answered the puppet, ashamed to confess that he had been floured like a fish prepared for the frying-pan.

"And what have you done with your jacket, your trousers, and your cap?"

"I met with robbers, who took them from me. Tell me, good old man, could you perhaps give me some clothes to return home in?"

"My boy, as to clothes, I have nothing but a little sack in which I keep beans. If you wish for it, take it; there it is."

Pinocchio did not wait to be told twice. He took the sack at once and with a pair of scissors he cut a hole at the end and at each side, and put it on like a shirt. And with this slight clothing he set off for the village.

But as he went he did not feel at all comfortable—so little so, indeed, that for a step forward he took another backwards, and he said, talking to himself:

"How shall I ever present myself to my good little Fairy? What will she say when she sees me? Will she forgive me this second escapade? Oh, I am sure that she will not forgive me! And it serves me right, for I am a rascal. I am always promising to correct myself and I never keep my word!"

When he reached the village it was night and very dark. A storm had come on and as the rain was coming down in torrents he went straight to the Fairy's house, resolved to knock at the door.

But when he was there his courage failed him and instead of knocking he ran away some twenty paces. He returned to the door a second time and laid hold of the knocker, and, trembling, gave a little knock.

He waited and waited. At last, after half an hour had passed, a window on the top floor was opened—the house was four stories high—and Pinocchio saw a big Snail with a lighted candle on her head looking out. She called to him:

"Who is there at this hour?"

"Is the Fairy at home?" asked the puppet.

"The Fairy is asleep and must not be awakened; but who are you?"

"And who is Pinocchio?"

"The puppet who lives in the Fairy's house."

"Ah, I understand!" said the Snail. "Wait for me there. I will come down and open the door directly."

An hour passed, and then two, and the door was not opened. Pinocchio, who was wet through and through, and trembling from cold and fear, at last took courage and knocked again, and this time he knocked louder.

At this second knock a window on the lower story opened and the same Snail appeared at it.

"Beautiful little Snail," cried Pinocchio from the street, "I have been waiting for two hours! And two hours on such a bad night seem longer than two years. Be quick, for pity's sake."

"My boy," answered the calm little animal—"my boy, I am a snail, and snails are never in a hurry."

And the window was shut again.

Shortly afterwards midnight struck; then one o'clock, then two o'clock, and the door remained still closed.

Pinocchio at last, losing all patience, seized the knocker in a rage, intending to give a blow that would resound through the house. But the knocker, which was iron, turned suddenly into an eel and, slipping out of his hands, disappeared in the stream of water that ran down the middle of the street.

"Ah! is that it?" shouted Pinocchio, blind with rage. "Since the knocker has disappeared, I will kick instead with all my might."

And, drawing a little back, he gave a tremendous kick against the house door. The blow was indeed so violent that his foot went through the wood and stuck; and when he tried to draw it back again it was trouble thrown away, for it remained fixed like a nail that has been hammered down.

Think of poor Pinocchio! He was obliged to spend the remainder of the night with one foot on the ground and the other in the air.

The following morning at daybreak the door was at last opened. The clever little Snail had taken only nine hours to come down from the fourth story to the house-door. It is evident that her exertions must have been great.

"What are you doing with your foot stuck in the door?" she asked the puppet.

"It was an accident. Do try, beautiful little Snail, if you cannot release me from this torture."

"My boy, that is the work of a carpenter, and I have never been a carpenter."

"Beg the Fairy from me!"

"The Fairy is asleep and must not be awakened."

"But what do you suppose that I can do all day nailed to this door?"

"Amuse yourself by counting the ants that pass down the street."

"Bring me at least something to eat, for I am quite exhausted."

In fact, after three hours and a half she returned to Pinocchio carrying a silver tray on her head. The tray contained a loaf of bread, a roast chicken, and four ripe apricots.

"Here is the breakfast that the Fairy has sent you," said the Snail.

The puppet felt very much comforted at the sight of these good things. But when he began to eat them, what was his disgust at making the discovery that the bread was plaster, the chicken cardboard, and the four apricots painted alabaster.

He wanted to cry. In his desperation he tried to throw away the tray and all that was on it; but instead, either from grief or exhaustion, he fainted away.

When he came to himself he found that he was lying on a sofa, and the Fairy was beside him.

"I will pardon you once more," the Fairy said, "but woe to you if you behave badly a third time!"

Pinocchio promised and swore that he would study, and that for the future he would always conduct himself well.

And he kept his word for the remainder of the year. Indeed, at the examinations before the holidays, he had the honor of being the first in the school, and his behavior in general was so satisfactory and praiseworthy that the Fairy was very much pleased, and said to him:

"Tomorrow your wish shall be gratified."

"Tomorrow you shall cease to be a wooden puppet and you shall become a boy."

No one who had not witnessed it could ever imagine Pinocchio's joy at this long-sighed-for good fortune. All his school-fellows were to be invited for the following day to a grand breakfast at the Fairy's house, that they might celebrate together the great event. The Fairy had prepared two hundred cups of coffee and milk, and four hundred rolls cut and buttered on each side. The day promised to be most happy and delightful, but—

Unfortunately in the lives of puppets there is always a "but" that spoils everything.