A Very Short Story
Big Two-Hearted River, Part I
Big Two-Hearted River, Part II
Cat in the Rain
Cross Country Snow
Indian Camp
In Our Time
L'Envoi
Mr. and Mrs. Elliott
My Old Man
Out of Season
Soldier's Home
The Battler
The Doctor and the Doctor's Wife
The End of Something
The Revolutionist
The Snows of Kilimanjaro
The Snows of Kilimanjaro - Summary
The Three Day Blow
Up in Michigan

At the End of the Ambulance Run
Daredevil Joins Tanks
Living on $1,000 a Year in Paris
Mix War, Art, and Dancing
Paris Is Full of Russians

Ernest Hemingway (1899 - 1961) was an iconic American journalist and author, known for his brief and straightforward style of writing and for the gusto with which he lived his life. He participated in World War I as an ambulance driver until he was injured; then again during World War II. He served as a war correspondent during the Spanish Civil War; survived car accidents and plane crashes as well as mishaps on hunting and fishing expeditions. And if that wasn't enough danger for one man, he crowned it with an exclamation point by marrying four times; Hadley Richardson (1921-1927), Pauline Pfeiffer (1927-1940), Martha Gellhorn (1940-1945) and Mary Welsh (1946-1961). His experiences in war led him to abandon abstract language as empty, in favor of his hallmark writing style, in which he savored simplified and concrete actions. As if it were so easy: "There is nothing to writing. All you do is sit down at a typewriter and bleed." 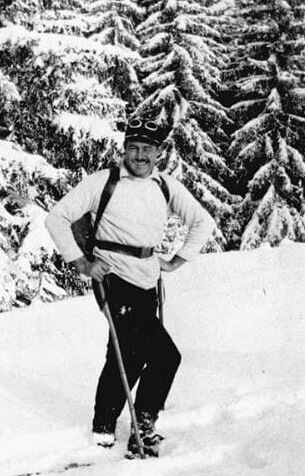 He is best known for his novels; most readers are familiar with The Sun Also Rises (1926), A Farewell to Arms (1929), For Whom the Bell Tolls (1940), and The Old Man and the Sea (1952). Though there were strong critics of his work -- particularly feminist-minded critics that were highly critical of his generally unflattering portrayal of female characters -- he received the Pulitzer Prize in 1953 for The Old Man and the Sea and the Nobel Prize in Literature in 1954. We feature Hemingway in our collection of Pulitzer Prize Winners.

Hemingway's novels are not yet in the public domain, but many of his short stories are, including The Snows of Kilimanjaro and his story collection, In Our Time. Considered one of the finest authors of "the Lost Generation" who experienced both world wars and the Spanish War.

Visit American History for other important figures and writing which helped shape the country.

"All modern American literature comes from one book by Mark Twain called Huckleberry Finn. There was nothing before. There has been nothing as good since.”