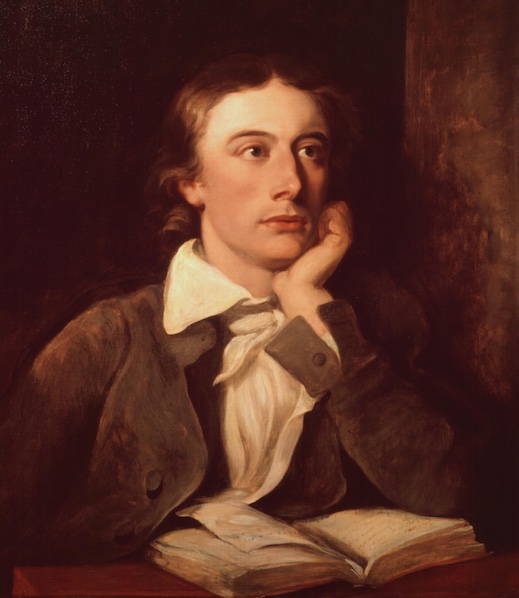 The English Romantic poet John Keats (1795 - 1821) died at twenty-five years of age, with his poems in publication for only the final four years of his life. Yet, along with Lord Byron and Percy Bysshe Shelley he has become one of the most important romantic poets and one of the most admired English poets. As so often happened, Keats received an uneven and lukewarm response from the critics of his day, and it was history that elevated his work to the stature it now enjoys.

As a Romantic poet, Keats attempted to evoke a strong emotional reaction through the use of sensual and natural imagery. He is especially noted and esteemed for a series of odes including Ode On A Grecian Urn, Ode To A Nightingale, and Ode On Melancholy.

Acrostic : Georgiana Augusta Keats
Addressed To Haydon
A Draught Of Sunshine
A Galloway Song
An Extempore
Answer To A Sonnet
A Party of Lovers
A Prophecy: To George Keats In America
Asleep! O Sleep A Little While, White Pearl!
A Song About Myself
A Thing of Beauty Is a Joy Forever
Ben Nevis : A Dialogue
Calidore: A Fragment
Character Of Charles Brown
Dawlish Fair
Dedication To Leigh Hunt, Esq.
Endymion: Book I
Endymion: Book II
Endymion: Book III
Endymion: Book IV
Epistle To John Hamilton Reynolds
Epistle To My Brother George
Extracts From An Opera
Faery Songs
Fancy
Fill For Me A Brimming Bowl
Fragment: Modern Love
Fragment Of An Ode To Maia. Written On May Day 1818
Fragment Of "The Castle Builder."
Fragment: Welcome Joy, And Welcome Sorrow
Fragment: Where's The Poet?
Give Me Women, Wine, And Snuff
Hither, Hither, Love
Hymn To Apollo
Hyperion, A Vision : Attempted Reconstruction Of The Poem
Hyperion. Book I
Hyperion. Book II
Hyperion. Book III
Imitation Of Spenser
Isabella; or, The Pot Of Basil
I Stood Tip-Toe Upon A Little Hill
La Belle Dame Sans Merci
Lamia
Le Belle Dame Sans Merci
Lines
Lines On Seeing A Lock Of Milton's Hair
Lines On The Mermaid Tavern
Lines Rhymed In A Letter From Oxford
Lines To Fanny
Lines Written In The Highlands After A Visit To Burns's Country
Meg Merrilies
Ode
Ode on a Grecian Urn
Ode On Indolence
Ode On Melancholy
Ode to a Nightingale
Ode To Apollo
Ode To Autumn
Ode To Fanny
Ode To Psyche
On A Dream
On Death
On Hearing The Bag-Pipe And Seeing "The Stranger" Played At Inverary
On Receiving A Curious Shell
On The Grasshopper and Cricket
On Visiting The Tomb Of Burns
Robin Hood
Sharing Eve's Apple
Sleep And Poetry
Song: Hush, Hush! Tread Softly!
Song. I Had A Dove
Song Of Four Fairies
Song: Written On A Blank Page In Beaumont And Fletcher's Works
Sonnet: A Dream, After Reading Dante's Episode Of Paulo And Francesca
Sonnet: After Dark Vapors Have Oppress'd Our Plains
Sonnet: As From The Darkening Gloom A Silver Dove
Sonnet: If By Dull Rhymes Our English Must Be Chain'd
Sonnet III: Written On The Day That Mr Leigh Hunt Left Prison
Sonnet II: To ----
Sonnet I: To My Brother George
Sonnet IV: How Many Bards Gild The Lapses Of Time!
Sonnet IX: Keen, Fitful Gusts Are
Sonnet: Oh! How I Love, On A Fair Summer's Eve
Sonnet: On A Picture Of Leander.
Sonnet: On Leigh Hunt's Poem 'The Story of Rimini.'
Sonnet: On The Sea
Sonnet: The Day Is Gone
Sonnet: The Human Seasons
Sonnet: To A Lady Seen For A Few Moments At Vauxhall
Sonnet: To A Young Lady Who Sent Me A Laurel Crown
Sonnet To Byron
Sonnet To Chatterton
Sonnet To George Keats: Written In Sickness
Sonnet To Homer
Sonnet To John Hamilton Reynolds
Sonnet To Mrs. Reynolds's Cat
Sonnet To Sleep
Sonnet To Spenser
Sonnet To The Nile
Sonnet VIII: To My Brothers
Sonnet VII: To Solitude
Sonnet VI: To G. A. W.
Sonnet V: To A Friend Who Sent Me Some Roses
Sonnet: When I Have Fears That I May Cease To Be
Sonnet: Why Did I Laugh Tonight?
Sonnet: Written Before Re-Read King Lear
Sonnet: Written In Answer To A Sonnet By J. H. Reynolds
Sonnet: Written In Disgust Of Vulgar Superstition
Sonnet: Written On A Blank Page In Shakespeare's Poems, Facing 'A Lover's Complaint'
Sonnet: Written On A Blank Space At The End Of Chaucer's Tale Of 'The Floure And The Lefe'
Sonnet: Written Upon The Top Of Ben Nevis
Sonnet XIII: Addressed To Haydon
Sonnet XII: On Leaving Some Friends At An Early Hour
Sonnet XI: On First Looking Into Chapman's Homer
Sonnet XIV: Addressed To The Same (Haydon)
Sonnet X: To One Who Has Been Long In City Pent
Sonnet XVII: Happy Is England
Sonnet XVI: To Kosciusko
Sonnet XV: On The Grasshopper And Cricket
Specimen Of An Induction To A Poem
Spenserian Stanzas On Charles Armitage Brown
Spenserian Stanza: Written At The Close Of Canto II, Book V, Of "The Faerie Queene"
Staffa
Stanzas: In A Drear-Nighted December
Stanzas To Miss Wylie
Teignmouth: "Some Doggerel," Sent In A Letter To B. R. Haydon
The Cap And Bells; Or, The Jealousies: A Faery Tale - Unfinished.
The Devon Maid: Stanzas Sent In A Letter To B. R. Haydon
The Eve Of Saint Mark. A Fragment
The Eve Of St. Agnes
The Gadfly
The Pot Of Basil; or, Isabella
This Living Hand
To Ailsa Rock
To Autumn
To Charles Cowden Clarke
To Emma
To Fanny
To George Felton Mathew
To Hope
To Some Ladies
Translated From A Sonnet Of Ronsard
Two Or Three
Two Sonnets On Fame
Two Sonnets: To Haydon, With A Sonnet Written On Seeing The Elgin Marbles
What The Thrush Said. Lines From A Letter To John Hamilton Reynolds
Woman! When I Behold Thee Flippant, Vain
Written In The Cottage Where Burns Was Born