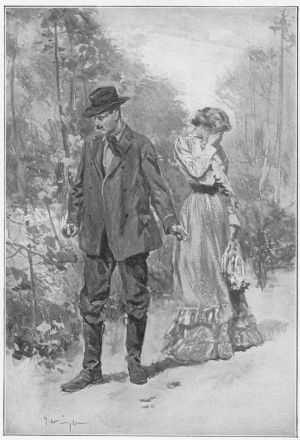 Stephen stood absolutely still in front of the opening in the trees, and as Rose turned she met him face to face. She had never dreamed his eyes could be so stern, his mouth so hard, and she gave a sob like a child.

"You seem to be in trouble," Stephen said in a voice so cold she thought it could not be his.

"I am not in trouble, exactly," Rose stammered, concealing her discomfiture as well as possible. "I am a little unhappy because I have made some one else unhappy; and now that you know it, you will be unhappy too, and angry besides, I suppose, though you've seen everything there was to see."

"There is no occasion for sorrow, Stephen said. "I didn't mean to break in on any interview; I came over to give you back your freedom. If you ever cared enough for me to marry me, the time has gone by. I am willing to own that I over-persuaded you, but I am not the man to take a girl against her inclinations, so we will say good-by and end the thing here and now. I can only wish --here his smothered rage at fate almost choked him--"that, when you were selecting another husband, you had chosen a whole man!"

Rose quivered with the scorn of his tone. "Size isn't everything!" she blazed.

"Not in bodies, perhaps; but it counts for something in hearts and brains, and it is convenient to have a sense of honor that's at least as big as a grain of mustard-seed."

"Claude Merrill is not dishonorable," Rose exclaimed impetuously; "or at least he isn't as bad as you think: he has never asked me to marry him."

"Then he probably was not quite ready to speak, or perhaps you were not quite ready to hear," retorted Stephen, bitterly; "but don't let us have words,--there'll be enough to regret without adding those. I have seen, ever since New Year's, that you were not really happy or contented; only I wouldn't allow it to myself: I kept hoping against hope that I was mistaken. There have been times when I would have married you, willing or unwilling, but I didn't love you so well then; and now that there's another man in the case, it's different, and I'm strong enough to do the right thing. Follow your heart and be happy; in a year or two I shall be glad I had the grit to tell you so. Good-by, Rose!"

Rose, pale with amazement, summoned all her pride, and drawing the turquoise engagement ring from her finger, handed it silently to Stephen, hiding her face as he flung it vehemently down the river-bank. His dull eyes followed it and half uncomprehendingly saw it settle and glisten in a nest of brown pine-needles. Then he put out his hand for a last clasp and strode away without a word.

Presently Rose heard first the scrape of his boat on the sand, then the soft sound of his paddles against the water, then nothing but the squirrels and the woodpeckers and the thrushes, then not even these,--nothing but the beating of her own heart.

She sat down heavily, feeling as if she were wide awake for the first time in many weeks. How had things come to this pass with her?

Claude Merrill had flattered her vanity and given her some moments of restlessness and dissatisfaction with her lot; but he had not until to-day really touched her heart or tempted her, even momentarily, from her allegiance to Stephen. His eyes had always looked unspeakable things; his voice had seemed to breathe feelings that he had never dared put in words; but to-day he had really stirred her, for although he had still been vague, it was easy to see that his love for her had passed all bounds of discretion. She remembered his impassioned farewells, his despair, his doubt as to whether he could forget her by plunging into the vortex of business, or whether he had better end it all in the river, as so many other broken-hearted fellows had done. She had been touched by his misery, even against her better judgment; and she had intended to confess it all to Stephen sometime, telling him that she should never again accept attentions from a stranger, lest a tragedy like this should happen twice in a lifetime.

She had imagined that Stephen would be his large-minded, great-hearted, magnanimous self, and beg her to forget this fascinating will-o'the-wisp by resting in his deeper, serener love. She had meant to be contrite and faithful, praying nightly that poor Claude might live down his present anguish, of which she had been the innocent cause.

Instead, what had happened? She had been put altogether in the wrong. Stephen had almost cast her off, and that, too, without argument. He had given her her liberty before she had asked for it, taking it for granted, without question, that she desired to be rid of him. Instead of comforting her in her remorse, or sympathizing with her for so nobly refusing to shine in Claude's larger world of Boston, Stephen had assumed that she was disloyal in every particular.

And pray how was she to cope with such a disagreeable and complicated situation?

It would not be long before the gossips rolled under their tongues the delicious morsel of a broken engagement, and sooner or later she must brave the displeasure of her grandmother.

And the little house--that was worse than anything. Her tears flowed faster as she thought of Stephen's joy in it, of his faithful labor, of the savings he had invested in it. She hated and despised her self when she thought of the house, and for the first time in her life she realized the limitations of her nature, the poverty of her ideals.

What should she do? She had lost Stephen and ruined his life. Now, in order that she need not blight a second career, must she contrive to return Claude's love! To be sure, she thought, it seemed indecent to marry any other man than Stephen, when they had built a house together, and chosen wall-papers, and a kitchen stove, and dining-room chairs; but was it not the only way to evade the difficulties?

Suppose that Stephen, in a fit of pique, should ask somebody else to share the new cottage?

As this dreadful possibility came into view, Rose's sobs actually frightened the birds and the squirrels. She paced back and forth under the trees, wondering how she could have been engaged to a man for eight months and know so little about him as she seemed to know about Stephen Waterman to-day. Who would have believed he could be so autocratic, so severe, so unapproachable! Who could have foreseen that she, Rose Wiley, would ever be given up to another man,--handed over as coolly as if she had been a bale of cotton? She wanted to return Claude Merrill's love because it was the only way out of the tangle; but at the moment she almost hated him for making so much trouble, for hurting Stephen, for abasing her in her own eyes, and, above all, for giving her rustic lover the chance of impersonating an injured emperor.

It did not simplify the situation to have Mite Shapley come in during the evening and run upstairs, uninvited, to sit on the toot of her bed and chatter.

Rose had closed her blinds and lay in the dark, pleading a headache.

Mite was in high feather. She had met Claude Merrill going to the station that afternoon. He was much too early for the train, which the station agent reported to be behind time, so he had asked her to take a drive. She didn't know how it happened, for he looked at his watch every now and then; but, anyway, they got to laughing and "carrying on," and when they came back to the station the train had gone. Wasn't that the greatest joke of the season? What did Rose suppose they did next?

Well, they had driven to Wareham, and Claude had hired a livery team there, and had been taken into Portland with his trunk, and she had brought Mrs. Brooks's horse back to Edgewood. Wasn't that ridiculous? And hadn't she cut out Rose where she least expected?

Rose was distinctly apathetic, and Mite Shapley departed after a very brief call, leaving behind her an entirely new train of thought.

If Claude Merrill were so love-blighted that he could only by the greatest self-control keep from flinging himself into the river, how could he conceal his sufferings so completely from Mite Shapley,--little shallow-pated, scheming coquette?

"So that pretty Merrill feller has gone, has he, mother?" inquired Old Kennebec that night, as he took off his wet shoes and warmed his feet at the kitchen oven. "Well, it ain't a mite too soon. I allers distrust that pink-an'-white, rosy-posy kind of a man. One of the most turrible things that ever happened in Gard'ner was brought about by jest sech a feller. Mothers hedn't hardly ought to name their boy babies Claude without they expect 'em to play the dickens with the girls. I don' know nothin' 'bout the fust Claude, there ain't none of 'em in the Bible, air they, but whoever he was, I bate ye he hed a deceivin' tongue. If it hedn't be'n for me, that Claude in Gard'ner would 'a' run away with my brother's fust wife; an' I'll tell ye jest how I contrived to put a spoke in his wheel."

But Mrs. Wiley, being already somewhat familiar with the circumstances, had taken her candle and retired to her virtuous couch.