Familiarity with any great thing removes our awe of it. The great general is only terrible to the enemy; the great poet is frequently scolded by his wife; the children of the great statesman clamber about his knees with perfect trust and impunity; the great actor who is called before the curtain by admiring audiences is often waylaid at the stage door by his creditors.

So Rob, having conversed for a time with the glorious Demon of Electricity, began to regard him with more composure and less awe, as his eyes grew more and more accustomed to the splendor that at first had[19] well-nigh blinded them.

When the Demon announced himself ready to do the boy's bidding, he frankly replied:

"I am no skilled electrician, as you very well know. My calling you here was an accident. So I don't know how to command you, nor what to ask you to do."

"But I must not take advantage of your ignorance," answered the Demon. "Also, I am quite anxious to utilize this opportunity to show the world what a powerful element electricity really is. So permit me to inform you that, having struck the Master Key, you are at liberty to demand from me three gifts each week for three successive weeks. These gifts, provided they are within the scope of electricity, I will grant."

"If I were a great electrician I should know what to ask," he said. "But I am too ignorant to take advantage of your kind[20] offer."

"Then," replied the Demon, "I will myself suggest the gifts, and they will be of such a character that the Earth people will learn the possibilities that lie before them and be encouraged to work more intelligently and to persevere in mastering those natural and simple laws which control electricity. For one of the greatest errors they now labor under is that electricity is complicated and hard to understand. It is really the simplest Earth element, lying within easy reach of any one who stretches out his hand to grasp and control its powers."

Rob yawned, for he thought the Demon's speeches were growing rather tiresome. Perhaps the genius noticed this rudeness, for he continued:

"I regret, of course, that you are a boy instead of a grown man, for it will appear singular to your friends that so thoughtless a youth should seemingly have mastered the[21] secrets that have baffled your most learned scientists. But that can not be helped, and presently you will become, through my aid, the most powerful and wonderful personage in all the world."

"Fun!" echoed the Demon, scornfully. "But never mind; I must use the material Fate has provided for me, and make the best of it."

"What will you give me first?" asked the boy, eagerly.

"That requires some thought," returned the Demon, and paused for several moments, while Rob feasted his eyes upon the gorgeous rays of color that flashed and vibrated in every direction and surrounded the figure of his visitor with an intense glow that resembled a halo.

Then the Demon raised his head and said:

"The thing most necessary to man is food to nourish his body. He passes a considerable part of his life in the struggle to procure food, to prepare it properly, and in the act of eating. This is not right. Your body can not be very valuable to you if all your time is required to feed it. I shall, therefore, present you, as my first gift, this box of tablets. Within each tablet are stored certain elements of electricity which are capable of nourishing a human body for a full day. All you need do is to toss one into your mouth each day and swallow it. It will nourish you, satisfy your hunger and build up your health and strength. The ordinary food of mankind is more or less injurious; this is entirely beneficial. Moreover, you may carry enough tablets in your pocket to last for months."

Here he presented Rob the silver box of tablets, and the boy, somewhat nervously, thanked him for the gift.

"The next requirement of man," continued the Demon, "is defense from his enemies.[23] I notice with sorrow that men frequently have wars and kill one another. Also, even in civilized communities, man is in constant danger from highwaymen, cranks and policemen. To defend himself he uses heavy and dangerous guns, with which to destroy his enemies. This is wrong. He has no right to take away what he can not bestow; to destroy what he can not create. To kill a fellow-creature is a horrid crime, even if done in self-defense. Therefore, my second gift to you is this little tube. You may carry it within your pocket. Whenever an enemy threatens you, be it man or beast, simply point the tube and press this button in the handle. An electric current will instantly be directed upon your foe, rendering him wholly unconscious for the period of one hour. During that time you will have opportunity to escape. As for your enemy, after regaining consciousness he will suffer no inconvenience from the encounter beyond a slight[24] headache."

"That's fine!" said Rob, as he took the tube. It was scarcely six inches long, and hollow at one end.

"The busy lives of men," proceeded the Demon, "require them to move about and travel in all directions. Yet to assist them there are only such crude and awkward machines as electric trolleys, cable cars, steam railways and automobiles. These crawl slowly over the uneven surface of the earth and frequently get out of order. It has grieved me that men have not yet discovered what even the birds know: that the atmosphere offers them swift and easy means of traveling from one part of the earth's surface to another."

"Some people have tried to build air-ships," remarked Rob.

"So they have; great, unwieldy machines which offer so much resistance to the air that they are quite useless. A big machine is not needed to carry one through the air.[25] There are forces in nature which may be readily used for such purpose. Tell me, what holds you to the Earth, and makes a stone fall to the ground?"

"Exactly. That is one force I refer to," said the Demon. "The force of repulsion, which is little known, but just as powerful, is another that mankind may direct. Then there are the Polar electric forces, attracting objects toward the north or south poles. You have guessed something of this by the use of the compass, or electric needle. Opposed to these is centrifugal electric force, drawing objects from east to west, or in the opposite direction. This force is created by the whirl of the earth upon its axis, and is easily utilized, although your scientific men have as yet paid little attention to it.

"These forces, operating in all directions, absolute and immutable, are at the disposal of mankind. They will carry you through[26] the atmosphere wherever and whenever you choose. That is, if you know how to control them. Now, here is a machine I have myself perfected."

The Demon drew from his pocket something that resembled an open-faced watch, having a narrow, flexible band attached to it.

"Perfectly!" cried Rob, taking the machine from the Demon with unfeigned delight. "This is really wonderful, and I'm awfully obliged to you!"

"Don't mention it," returned the Demon, dryly. "These three gifts you may amuse yourself with for the next week. It seems hard to entrust such great scientific discoveries to the discretion of a mere boy; but they are quite harmless, so if you exercise proper care you can not get into trouble through their possession. And who knows what benefits to humanity may result? One week from to-day, at this hour, I will again appear to you, at which time you shall receive the second series of electrical gifts."

"I'm not sure," said Rob, "that I shall be able again to make the connections that will strike the Master Key."

"Probably not," answered the Demon. "Could you accomplish that, you might command my services forever. But, having once succeeded, you are entitled to the nine gifts—three each week for three weeks—so[28] you have no need to call me to do my duty. I shall appear of my own accord."

"Thank you," murmured the boy.

The Demon bowed and spread his hands in the form of a semi-circle. An instant later there was a blinding flash, and when Rob recovered from it and opened his eyes the Demon of Electricity had disappeared. 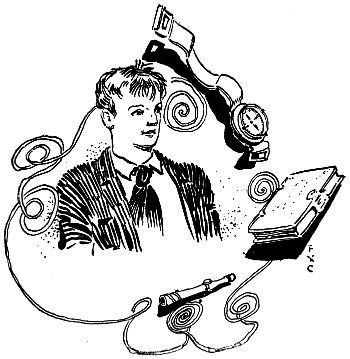