Chapter XVII - The Coast of Oregon

When he had somewhat recovered, Rob sat up and looked around him. The elder sailor was kneeling in earnest prayer, offering grateful thanks for his escape from suffering and death. The younger one lay upon the ground sobbing and still violently agitated by recollections of the frightful experiences he had undergone. Although he did not show his feelings as plainly as the men, the boy was none the less gratified at having been instrumental in saving the lives of two fellow-beings.

The darkness was by this time rapidly enveloping them, so Rob asked his companions to gather some brushwood and light a fire, which they quickly did. The evening was cool for the time of year, and the heat from the fire was cheering and grateful; so they all lay near the glowing embers and fell fast asleep.

The sound of voices aroused Rob next morning, and on opening his eyes and gazing around he saw several rudely dressed men approaching. The two shipwrecked sailors were still sound asleep.

Rob stood up and waited for the strangers to draw near. They seemed to be fishermen, and were much surprised at finding three people asleep upon the bluff.

"From the sea," replied the boy. "My friends here are shipwrecked sailors from the 'Cynthia Jane.'"

"But how'd ye make out to climb the bluff?" inquired a second fisherman; "no[208] one ever did it afore, as we knows on."

"Oh, that is a long story," replied the boy, evasively.

The two sailors had awakened and now saluted the new-comers. Soon they were exchanging a running fire of questions and answers.

"Where are we?" Rob heard the little sailor ask.

"Coast of Oregon," was the reply. "We're about seven miles from Port Orford by land an' about ten miles by sea."

"Do you live at Port Orford?" inquired the sailor.

"That's what we do, friend; an' if your party wants to join us we'll do our best to make you comf'table, bein' as you're shipwrecked an' need help."

Just then a loud laugh came from another group, where the elder sailor had been trying to explain Rob's method of flying through the air.

"Laugh all you want to," said the sailor, sullenly; "it's true—ev'ry word of it!"

"Mebbe you think it, friend," answered a big, good-natured fisherman; "but it's well known that shipwrecked folks go crazy sometimes, an' imagine strange things. Your mind seems clear enough in other ways, so I advise you to try and forget your dreams about flyin'."

Rob now stepped forward and shook hands with the sailors.

"I see you have found friends," he said to them, "so I will leave you and continue my journey, as I'm in something of a hurry."

Both sailors began to thank him profusely for their rescue, but he cut them short.

"That's all right. Of course I couldn't leave you on that island to starve to death, and I'm glad I was able to bring you away with me."

"But you threatened to drop me into the sea," remarked the little sailor, in a grieved[210] voice.

"So I did," said Rob, laughing; "but I wouldn't have done it for the world—not even to have saved my own life. Good-by!"

He turned the indicator and mounted skyward, to the unbounded amazement of the fishermen, who stared after him with round eyes and wide open mouths.

"This sight will prove to them that the sailors are not crazy," he thought, as he turned to the south and sped away from the bluff. "I suppose those simple fishermen will never forget this wonderful occurrence, and they'll probably make reg'lar heroes of the two men who have crossed the Pacific through the air."

He followed the coast line, keeping but a short distance above the earth, and after an hour's swift flight reached the city of San Francisco.

His shoulders were sore and stiff from the heavy strain upon them of the previous day,[211] and he wished more than once that he had some of his mother's household liniment to rub them with. Yet so great was his delight at reaching once more his native land that all discomforts were speedily forgotten.

Much as he would have enjoyed a day in the great metropolis of the Pacific slope, Rob dared not delay longer than to take a general view of the place, to note its handsome edifices and to wonder at the throng of Chinese inhabiting one section of the town.

These things were much more plainly and quickly viewed by Rob from above than by threading a way through the streets on foot; for he looked down upon the city as a bird does, and covered miles with a single glance.

Having satisfied his curiosity without attempting to alight, he turned to the southeast and followed the peninsula as far as Palo Alto, where he viewed the magnificent buildings of the university. Changing his course to the east, he soon reached Mount[212] Hamilton, and, being attracted by the great tower of the Lick Observatory, he hovered over it until he found he had attracted the excited gaze of its inhabitants, who doubtless observed him very plainly through the big telescope.

But so unreal and seemingly impossible was the sight witnessed by the learned astronomers that they have never ventured to make the incident public, although long after the boy had darted away into the east they argued together concerning the marvelous and incomprehensible vision. Afterward they secretly engrossed the circumstance upon their records, but resolved never to mention it in public, lest their wisdom and veracity should be assailed by the skeptical.

Meantime Rob rose to a higher altitude, and sped swiftly across the great continent. By noon he sighted Chicago, and after a brief inspection of the place from the air determined to devote at least an hour to forming the acquaintance of this most wonderful and cosmopolitan city. 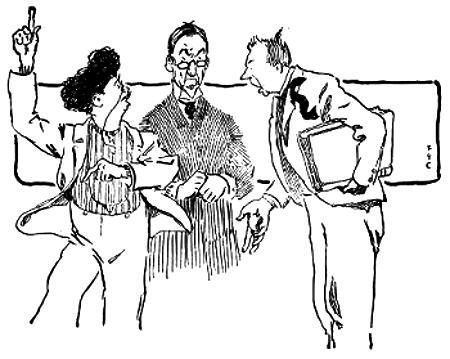