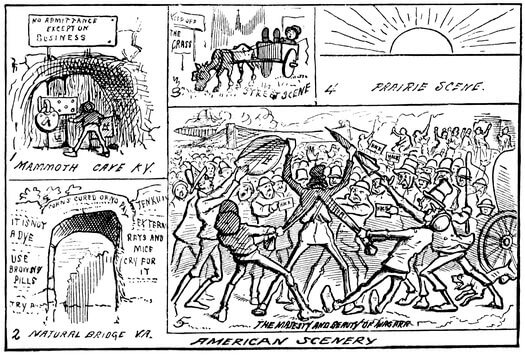 Few countries can boast such a variety of natural features as our own America.

To the intelligent tourist of unlimited bank account this country affords abundant material for the study of nature with all the modern improvements, including gas, hot and cold water, and an elevator running every five minutes up to the fifteenth floor. Terms invariably in advance.

Our illustration on the opposite page conveys but a feeble idea of the magnitude of some of the wonderful freaks of nature 217which the tourist “doing” American is liable at any moment to stumble upon.

5. THE MAJESTY AND BEAUTY OF NIAGARA.

218In No. 1 we have the Mammoth Cave. It takes its name from the gentleman upon whose property it is located, and who uses it as a sub-cellar in Winter, and locks himself up in it during the tax-gathering season. Our illustration treats of the latter period. The Natural Bridge (No. 2) is a marvel of architecture, and is lavishly decorated with appropriate inscriptions. No. 3 hardly comes under the head of Natural Scenery, and would appear to be rather a sudden change from the sweet realms of nature to the busy haunts of men; but contrast is everything, and we turn from this turbulent scene to one of delicious repose. No. 4, a Western prairie. Here the eye wanders off over a 219rich and varied landscape of level country, till finally in the distance it encounters what? a vast spider? No. That is only the setting sun, as we ascertained in a private conversation with the artist. No. 5. We hardly know how to treat this matter. In writing about Niagara it is customary to either rush madly into poetry or break hysterically into exclamation points. We had heard a great deal about the awful majesty of Niagara Falls, and went there to obtain, if possible, a personal interview, intending to write it up in a style that would bankrupt our printer. We say we went there expecting much, but we found that the half had not been told us. If it had, we should have remained at home. Perhaps the least said about it the better.