An Old Woman's Tale
A Rill from the Town-Pump
Benjamin Franklin
Chippings with a Chisel
Circe's Palace
David Swan
Dr. Heidegger's Experiment
Drowne's Wooden Image
Edward Fane's Rosebud
Egotism; or, The Bosom Serpent
Endicott and the Red Cross
Ethan Brand
Fancy's Show-Box
Feathertop
Fire Worship
Footprints on the Seashore
Graves and Goblins
How Theseus Slays the Minotaur
John Inglefield's Thanksgiving
Legends of the Province House: I. Howe's Masquerade
Legends of the Province House: II. Edward Randolph's Portrait
Legends of the Province House: III. Lady Eleanore's Mantle
Legends of the Province House: IV. Old Esther Dudley
Little Annie's Ramble
Monsieur du Miroir
Mosses from an Old Manse
Mr. Higginbotham's Catastrophe
Mrs. Bullfrog
My Kinsman, Major Molineux
Night-Sketches
Oliver Cromwell
Passages from a Relinquished Work
Pegasus, The Winged Horse
Peter Goldthwaite's Treasure
Rappaccini's Daughter
Roger Malvin's Burial
Sights from a Steeple
Sir Isaac Newton
Sketches from Memory
Snowflakes
Sunday At Home
The Ambitious Guest
The Antique Ring
The Artist of the Beautiful
The Birthmark
The Boston Massacre
The Canterbury Pilgrims
The Celestial Railroad
The Chimaera
The Christmas Banquet
The Devil in Manuscript
The Dragon's Teeth
The Gentle Boy
The Ghost of Dr. Harris
The Golden Fleece
The Golden Touch
The Gorgon's Head
The Gray Champion
The Great Carbuncle
The Great Stone Face
The Hall of Fantasy
The Haunted Mind
The Hollow of the Three Hills
The Intelligence Office
The Lilly's Quest
The Maypole of Merry Mount
The Minister's Black Veil
The Minotaur
The New Adam and Eve
The Old Apple-Dealer
The Paradise of Children
The Pomegranate Seeds
The Procession of Life
The Prophetic Pictures
The Pygmies
The Seven Vagabonds
The Shaker Bridal
The Sister-Years
The Snow Image: A Childish Miracle
The Threefold Destiny
The Three Golden Apples
The Toll-Gatherer's Day
The Village Uncle
The Vision of the Fountain
The Wayside. Introductory.
The Wedding Knell
The White Old Maid
The Wives of the Dead
Wakefield
Young Goodman Brown

Buds and Bird-Voices
My Visit to Niagara

Nathaniel Hawthorne, born on July 4, 1804 in Salem, Massachusetts was an American short story writer and romance novelist who experimented with a broad range of styles and genres. He is best known for his short stories and two widely read novels: The Scarlet Letter (mid-March 1850) and The House of Seven Gables (1851). Along with Herman Melville and Edgar Allan Poe much of Hawthorne's work belongs to the sub-genre of Dark Romanticism, distinguished by an emphasis on human fallibility that gives rise to lapses in judgement that allow even good men and women to drift toward sin and self-destruction. Dark Romantics tends to draw attention to the unintended consequences and complications that arise from well-intended efforts at social reform. Melville dedicated his epic novel, Moby-Dick to Hawthorne: "In token of my admiration for his genius." Hawthorne's lesser-known poems exemplify Dark Romanticism; some of his darkest works, including his ghost stories and tales involving the supernatural, fall within the genre of Gothic Literature.

Young Hawthorne was a contemporary of fellow Transcendalists: Ralph Waldo Emerson, Henry David Thoreau, and Louisa May Alcott, Hawthorne was part of this prominent circle of Massachusetts writers and philosophers. The Transcendentalists believed in the "inherent goodness of both people and nature." I would encourage you to think of them as intellectual hippies of the early 19th century (the movement sprang forth in the 1820s and 1830s). Hawthorne was a founding member of Brook Farm, a utopian experiment in communal living -- though he is not portrayed as a deep believer in its ideals. As Hawthorne matured, he drifted further and further from some of the transcendental principles. In fact, his later writing, produced after greater experience in the world, demonstrated an increasing disdain for the Transcendental Movement. He notably fictionalized the experiences of Brook Farm in his satirical novel The Blithedale Romance (1852). 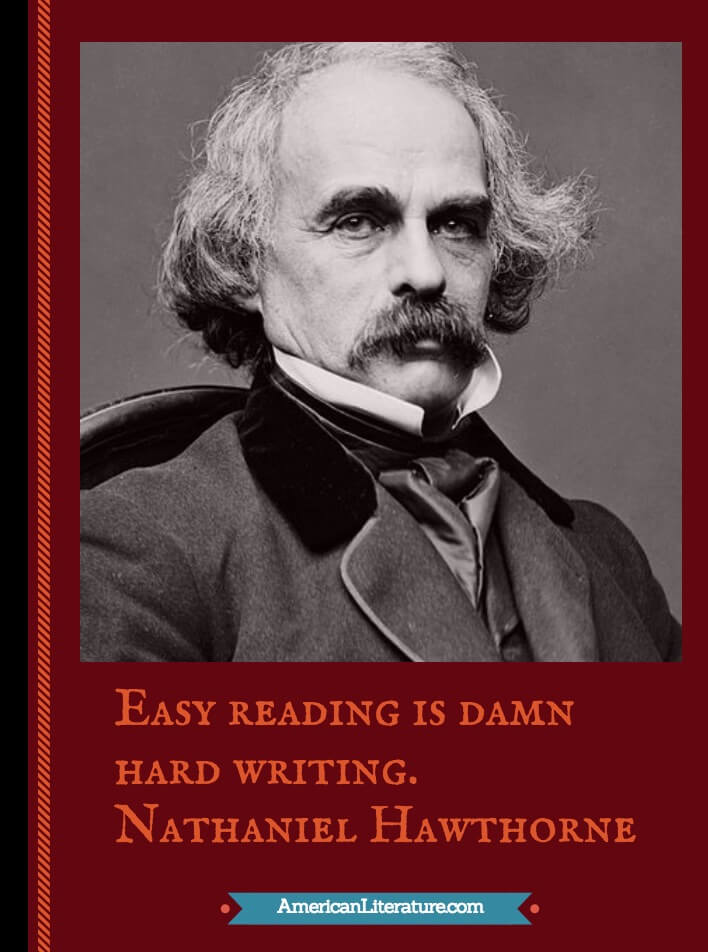 I think it's important to mark Hawthorne's migration from a young Transcendental idealist to a Dark Romantic writer. At one level it's a remarkable journey because the older man comes to embrace the opposite inclinations of his youth; that rather then being inherently good, people were deeply fallible, prone to lapses in judgement and they difted easily to sin. Furthermore, some of their greatest sins were committed under the umbrella of good intentions. On another level, the journey is common-place, as almost all individuals discover that the journey of life tempers their youthful idealism. But there is also a personal history the weighed heavily on Hawthorne. He had two stern forefathers in his patrilineal heritage, his great-great-great grandfather and his great-great-grandfather John Hathorne. So he knew well that men could, cloaked in the countenance of goodness and piety, commit great sin. Here is Hawthorne describing them both (starting with the great-great-great grandfather):


He was a soldier, legislator, judge; he was a ruler in the Church; he had all the Puritanical traits, both good and evil. He was likewise a bitter persecutor; as witness the Quakers, who have remembered him in their histories, and relate an incident of his hard severity towards a woman of their sect, which will last longer, it is to be feared, than any record of his better deeds, although these were many. His son, too, inherited the persecuting spirit, and made himself so conspicuous in the martyrdom of the witches, that their blood may fairly be said to have left a stain upon him. So deep a stain, indeed, that his dry old bones, in the Charter Street burial-ground, must still retain it, if they have not crumbled utterly to dust!
Hawthorne was acutely aware of his ancestors' sins, so ashamed that he was actually born "Hathorne" and added the "w" to hide his true lineage.

With knowledge of these biographical details, the reader can easily see the influence of his ancestors not only rise up in his drift into Dark Romanticism, but also in his writing, which was often set in colonial New England and heavily weighted with the moral complexity of his Puritan background (and perhaps the deeds of his ancestors in those communities). Which brings us to his most acclaimed work. The Scarlet Letter, a work rife with moral complexity.

The Scarlet Letter was one of the first mass-produced novels in America and became an instant best seller, selling over 2,500 copies in the first two weeks. It has been praised for its sentimentality and moral purity by the likes of D. H. Lawrence, who said that there could be no more perfect work of the American imagination.Though Edgar Allan Poe -- a fellow author in the Dark Romantic Movement and influential literary critic -- wrote negative reviews of Hawthorne's stories. Poe did not admire stories that were allegorical and moral in nature so his criticism was in form. Though even he begrudgingly acknowledged that Hawthorne's style "is like purity itself." Hawthorne's highest regarded short stories include My Kinsman, Major Molineaux (1832), Young Goodman Brown (1835), Feathertop (1852), and The Minister's Black Veil.

Now I am going to break from my biographical narrative to add a personal note. After a lifetime of reading, Nathaniel Hawthorne has emerged as one of my absolute favorite authors of all time. If you are not having fun while reading Hawthorne you are doing it wrong! For instance, My Kinsman, Major Molineaux is a comic short story and should be enjoyed as such (it does have a "tragic" ending). It's the story of a young "hayseed" on his first visit to the "big city" and he suffers the embarrassments one would expect and few extras thrown in for good measure. It could inspire a Monty Python skit. I think there is a secret to understanding and appreciating Hawthorne's body of work. And I will share that with you. But be warned; he is not a cheap date! You will have to work hard before you can truly love this writer.

The price of admission is that one must read and study over the introductory chapter to The Scarlet Letter, The Custom-House. Then read the Preface to the Second Edition and then -- sorry -- read The Custom-House again. As much as it will not feel like it at the time, if you are a high school student, and your English teacher has asked you to specifically read The Custom-House, it's because he or she loves you and cares about your education (which as Twain famously pointed out, should not be confused with your schooling). You will know that you truly understand those two introductory chapters when you realize the Nathaniel Hawthorne was a mid-1850s Bad Ass who explicitly, purposely, and repeatedly "stuck it to the man", even after, heck especially after they asked him to stop! I also do not think you can properly understand The Scarlet Letter without understanding The Custom-House (and also marking the sins of Hawthorne's forefathers). I assure you, the effort is worth the reward. [And I do offer belated apologies to my sophomore English teacher for my essay entitled, "Why I Hate English Class," which I tendered like a smart-aleck after my first bout with The Custom-House way back in 1981.]

For the record, Hawthorne died in his sleep in 1864 during a tour of the White Mountains in Plymouth, New Hampshire. He was educated at one of my favorite small universities, Bowdoin College, where he was a student from 1821-1824.