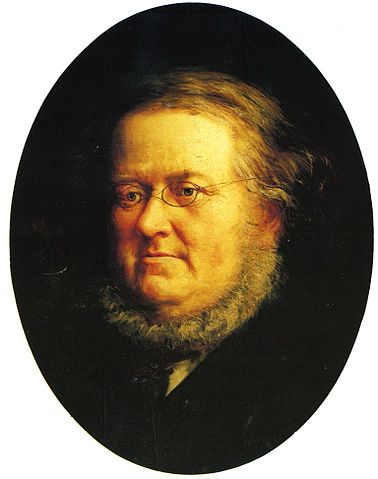 Peter Christen Asbjornsen (1812 - 1885) was a Norwegian folklore writer and teacher who partnered with Jorgen Engebretsen Moe, a writer and minister, to publish a remarkable collection of Norwegian folktales and legends, Norwegian Folktales (Norske Folkeeventyr), first published in 1841. The stories were published piecemeal at first, and the first English translation of their fifty-eight tales was completed by Sir George Webbe Dasent in 1859, titled Dasent's Popular Tales from the Norse.

Asbjornsen started documenting legends and fairy tales when he was twelve, and later in life walked the entire length of Norway. Moe researched and began collecting relics of national folklore independently from Asbjornsen. The pair, known as Asbjornsen and Moe, was inspired by The Brothers Grimm, and assumed great national pride in their responsibility to re-tell and publish Norse stories for a world-wide audience. One of their more popular tales, The Three Billy-Goats Gruff, is featured in our Children's Library and Favorite Fairy Tales. During the winter holidays, enjoy Asbornsen's 'Round the Yule Log, Christmas in Norway (1895). You may also enjoy the stories by fellow Norwegians, Bjornstjerne Bjornson and Alexander Kielland.

Grumblegizzard
Round the Yule-Log: Christmas in Norway