Conveniently omitted from most history text and lessons, Executive Order 6102 is a clear example of the United States Government using force to confiscate private property from American citizens. The order was signed by President Franklin D. Roosevelt on April 5, 1934. It effectively allowed the U.S. government to seize gold coins and bullion from its own people. Any citizen that did not comply with the confiscatory order faced up to $10,000 in fines and ten years in prison.

The government payed citizens $20.67 per troy ounce. In short order, they raised the price to $35 per troy ounce. The effect was to create an instant profit of $2.8 Billion dollars ($50.11B in 2015 dollars) for the U.S. government and to promptly devalue the paper currency used to "pay" citizens for “their” gold; effectively robbing them twice.

Please read the order carefully. Make history come alive and imagine that your family had worked for generations to acquire some modest wealth, some of which was stored in gold, and was now in your possession. Keep in mind that this was a real Executive Order and that was the exact situation that many Americans found themselves in when President Roosevelt issued this Executive Order. 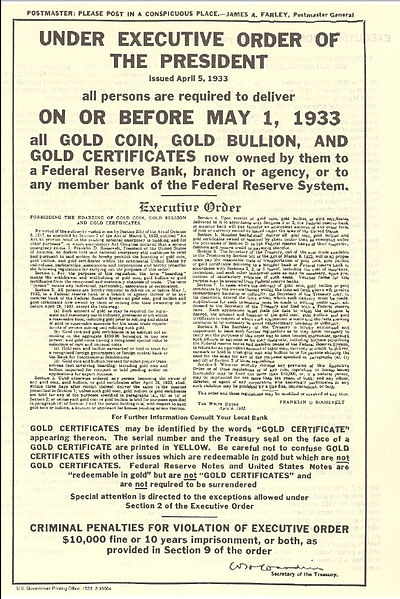 By virtue of the authority vested in me by Section 5 (b) of the Act of October 6, 1917, as amended by Section 2 of the Act of March 9, 1933, entitled "An Act to provide relief in the existing national emergency in banking, and for other purposes," in which amendatory Act Congress declared that a serious emergency exists, I, Franklin D. Roosevelt, President of the United States of America, do declare that said national emergency still continues to exist and pursuant to said section do hereby prohibit the hoarding of gold coin, gold bullion, and gold certificates within the continental United States by individuals, partnerships, associations and corporations and hereby prescribe the following regulations for carrying out the purposes of this order: Section 1. For the purposes of this regulation, the term "hoarding" means the withdrawal and withholding of gold coin, gold bullion or gold certificates from the recognized and customary channels of trade. The term "person" means any individual, partnership, association or corporation.

Section 2. All persons are hereby required to deliver on or before May 1, 1933, to a Federal Reserve Bank or a branch or agency thereof or to any member bank of the Federal Reserve System all gold coin, gold bullion and gold certificates now owned by them or coming into their ownership on or before April 28, 1933, except the following:

(a) Such amount of gold as may be required for legitimate and customary use in industry, profession or art within a reasonable time, including gold prior to refining and stocks of gold in reasonable amounts for the usual trade requirements of owners mining and refining such gold.

(b) Gold coin and gold certificates in an amount not exceeding in the aggregate $100 belonging to any one person; and gold coins having a recognized special value to collectors of rare and unusual coins.

(c) Gold coin and bullion earmarked or held in trust for a recognized foreign Government or foreign central bank or the Bank for International Settlements.

Section 3. Until otherwise ordered any person becoming the owner of any gold coin, gold bullion, or gold certificates after April 28, 1933, shall, within three days after receipt thereof, deliver the same in the manner prescribed in Section 2; unless such gold coin, gold bullion or gold certificates are held for any of the purposes specified in paragraphs (a), (b), or (c) of Section 2; or unless such gold coin or gold bullion is held for purposes specified in paragraph (d) of Section 2 and the person holding it is, with respect to such gold coin or bullion, a licensee or applicant for license pending action thereon.

Section 4. Upon receipt of gold coin, gold bullion or gold certificates delivered to it in accordance with Sections 2 or 3, the Federal Reserve Bank or member bank will pay therefor an equivalent amount of any other form of coin or currency coined or issued under the laws of the United States.

Section 5. Member banks shall deliver all gold coin, gold bullion and gold certificates owned or received by them (other than as exempted under the provisions of Section 2) to the Federal Reserve Banks of their respective districts and receive credit or payment therefor.

Section 6. The Secretary of the Treasury, out of the sum made available to the President by Section 501 of the Act of March 9, 1933, will in all proper cases pay the reasonable costs of transportation of gold coin, gold bullion or gold certificates delivered to a member bank or Federal Reserve Bank in accordance with Section 2, 3, or 5 hereof, including the cost of insurance, protection, and such other incidental costs as may be necessary, upon production of satisfactory evidence of such costs. Voucher forms for this purpose may be procured from Federal Reserve Banks.

Section 7. In cases where the delivery of gold coin, gold bullion or gold certificates by the owners thereof within the time set forth above will involve extraordinary hardship or difficulty, the Secretary of the Treasury may, in his discretion, extend the time within which such delivery must be made. Applications for such extensions must be made in writing under oath, addressed to the Secretary of the Treasury and filed with a Federal Reserve Bank. Each application must state the date to which the extension is desired, the amount and location of the gold coin, gold bullion and gold certificates in respect of which such application is made and the facts showing extension to be necessary to avoid extraordinary hardship or difficulty.

Section 8. The Secretary of the Treasury is hereby authorized and empowered to issue such further regulations as he may deem necessary to carry out the purposes of this order and to issue licenses thereunder, through such officers or agencies as he may designate, including licenses permitting the Federal Reserve Banks and member banks of the Federal Reserve System, in return for an equivalent amount of other coin, currency or credit, to deliver, earmark or hold in trust gold coin and bullion to or for persons showing the need for the same for any of the purposes specified in paragraphs (a), (c) and (d) of Section 2 of these regulations.

Section 9. Whoever willfully violates any provision of this Executive Order or of these regulations or of any rule, regulation or license issued thereunder may be fined not more than $10,000, or, if a natural person, may be imprisoned for not more than ten years, or both; and any officer, director, or agent of any corporation who knowingly participates in any such violation may be punished by a like fine, imprisonment, or both.

This order and these regulations may be modified or revoked at any time.

Readers might also be interested in Executive Order 9066 which authorized the internment of U.S. Citizens of Japanese (and also German and Italian) descent.