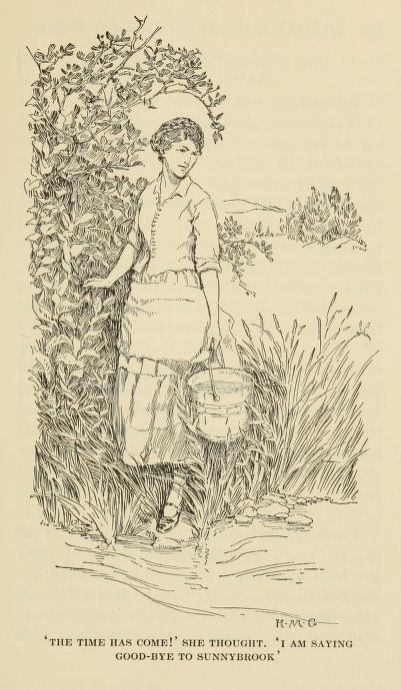 Will Melville drove up to the window and, tossing a letter into Rebecca's lap, went off to the barn on an errand.

"Sister 's no worse, then," sighed Aurelia gratefully, "or Jane would have telegraphed. See what she says."

Rebecca opened the envelope and read in one flash of an eye the whole brief page:--

Your aunt Miranda passed away an hour ago. Come at once, if your mother is out of danger. I shall not have the funeral till you are here. She died very suddenly and without any pain. Oh, Rebecca! I long for you so!

The force of habit was too strong, and even in the hour of death Jane had remembered that a telegram was twenty-five cents, and that Aurelia would have to pay half a dollar for its delivery.

Rebecca burst into a passion of tears as she cried, "Poor, poor aunt Miranda! She is gone without taking a bit of comfort in life, and I couldn't say good-by to her! Poor lonely aunt Jane! What can I do, mother? I feel torn in two, between you and the brick house."

"You must go this very instant," said Aurelia; starting from her pillows. "If I was to die while you were away, I would say the very same thing. Your aunts have done everything in the world for you,--more than I've ever been able to do,--and it is your turn to pay back some o' their kindness and show your gratitude. The doctor says I've turned the corner and I feel I have. Jenny can make out somehow, if Hannah'll come over once a day."

"But, mother, I can't go! Who'll turn you in bed?" exclaimed Rebecca, walking the floor and wringing her hands distractedly.

"It don't make any difference if I don't get turned," replied Aurelia stoically. "If a woman of my age and the mother of a family hasn't got sense enough not to slip off haymows, she'd ought to suffer. Go put on your black dress and pack your bag. I'd give a good deal if I was able to go to my sister's funeral and prove that I've forgotten and forgiven all she said when I was married. Her acts were softer 'n her words, Mirandy's were, and she's made up to you for all she ever sinned against me 'n' your father! And oh, Rebecca," she continued with quivering voice, "I remember so well when we were little girls together and she took such pride in curling my hair; and another time, when we were grown up, she lent me her best blue muslin: it was when your father had asked me to lead the grand march with him at the Christmas dance, and I found out afterwards she thought he'd intended to ask her!"

Here Aurelia broke down and wept bitterly; for the recollection of the past had softened her heart and brought the comforting tears even more effectually than the news of her sister's death.

There was only an hour for preparation. Will would drive Rebecca to Temperance and send Jenny back from school. He volunteered also to engage a woman to sleep at the farm in case Mrs. Randall should be worse at any time in the night.

Rebecca flew down over the hill to get a last pail of spring water, and as she lifted the bucket from the crystal depths and looked out over the glowing beauty of the autumn landscape, she saw a company of surveyors with their instruments making calculations and laying lines that apparently crossed Sunnybrook at the favorite spot where Mirror Pool lay clear and placid, the yellow leaves on its surface no yellower than its sparkling sands.

She caught her breath. "The time has come!" she thought. "I am saying good-by to Sunnybrook, and the golden gates that almost swung together that last day in Wareham will close forever now. Good-by, dear brook and hills and meadows; you are going to see life too, so we must be hopeful and say to one another:--

Will Melville had seen the surveyors too, and had heard in the Temperance post-office that morning the probable sum that Mrs. Randall would receive from the railway company. He was in good spirits at his own improved prospects, for his farm was so placed that its value could be only increased by the new road; he was also relieved in mind that his wife's family would no longer be in dire poverty directly at his doorstep, so to speak. John could now be hurried forward and forced into the position of head of the family several years sooner than had been anticipated, so Hannah's husband was obliged to exercise great self-control or he would have whistled while he was driving Rebecca to the Temperance station. He could not understand her sad face or the tears that rolled silently down her cheeks from time to time; for Hannah had always represented her aunt Miranda as an irascible, parsimonious old woman, who would be no loss to the world whenever she should elect to disappear from it.

"Cheer up, Becky!" he said, as he left her at the depot. "You'll find your mother sitting up when you come back, and the next thing you know the whole family'll be moving to some nice little house wherever your work is. Things will never be so bad again as they have been this last year; that's what Hannah and I think;" and he drove away to tell his wife the news.

Adam Ladd was in the station and came up to Rebecca instantly, as she entered the door looking very unlike her bright self.

"The Princess is sad this morning," he said, taking her hand. "Aladdin must rub the magic lamp; then the slave will appear, and these tears be dried in a trice."

He spoke lightly, for he thought her trouble was something connected with affairs at Sunnybrook, and that he could soon bring the smiles by telling her that the farm was sold and that her mother was to receive a handsome price in return. He meant to remind her, too, that though she must leave the home of her youth, it was too remote a place to be a proper dwelling either for herself or for her lonely mother and the three younger children. He could hear her say as plainly as if it were yesterday, "I don't think one ever forgets the spot where one lived as a child." He could see the quaint little figure sitting on the piazza at North Riverboro and watch it disappear in the lilac bushes when he gave the memorable order for three hundred cakes of Rose-Red and Snow-White soap.

A word or two soon told him that her grief was of another sort, and her mood was so absent, so sensitive and tearful, that he could only assure her of his sympathy and beg that he might come soon to the brick house to see with his own eyes how she was faring.

Adam thought, when he had put her on the train and taken his leave, that Rebecca was, in her sad dignity and gravity, more beautiful than he had ever seen her,--all-beautiful and all-womanly. But in that moment's speech with her he had looked into her eyes and they were still those of a child; there was no knowledge of the world in their shining depths, no experience of men or women, no passion, nor comprehension of it. He turned from the little country station to walk in the woods by the wayside until his own train should be leaving, and from time to time he threw himself under a tree to think and dream and look at the glory of the foliage. He had brought a new copy of The Arabian Nights for Rebecca, wishing to replace the well-worn old one that had been the delight of her girlhood; but meeting her at such an inauspicious time, he had absently carried it away with him. He turned the pages idly until he came to the story of Aladdin and the Wonderful Lamp, and presently, in spite of his thirty-four years, the old tale held him spellbound as it did in the days when he first read it as a boy. But there were certain paragraphs that especially caught his eye and arrested his attention,-- paragraphs that he read and reread, finding in them he knew not what secret delight and significance. These were the quaintly turned phrases describing the effect on the once poor Aladdin of his wonderful riches, and those descanting upon the beauty and charm of the Sultan's daughter, the Princess Badroulboudour:--

Not only those who knew Aladdin when he played in the streets like a vagabond did not know him again; those who had seen him but a little while before hardly knew him, so much were his features altered; such were the effects of the lamp, as to procure by degrees to those who possessed it, perfections agreeable to the rank the right use of it advanced them to.

The Princess was the most beautiful brunette in the world; her eyes were large, lively, and sparkling; her looks sweet and modest; her nose was of a just proportion and without a fault; her mouth small, her lips of a vermilion red, and charmingly agreeable symmetry; in a word, all the features of her face were perfectly regular. It is not therefore surprising that Aladdin, who had never seen, and was a stranger to, so many charms, was dazzled. With all these perfections the Princess had so delicate a shape, so majestic an air, that the sight of her was sufficient to inspire respect.

"Adorable Princess," said Aladdin to her, accosting her, and saluting her respectfully, "if I have the misfortune to have displeased you by my boldness in aspiring to the possession of so lovely a creature, I must tell you that you ought to blame your bright eyes and charms, not me."

"Prince," answered the Princess, "it is enough for me to have seen you, to tell you that I obey without reluctance."