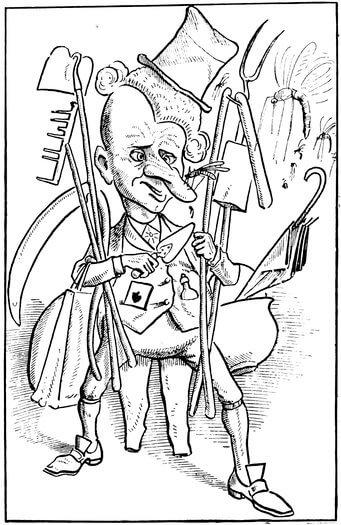 Not many generations ago New Jersey was a buzzing wilderness—howling would be a misnomer, as the tuneful mosquito had it all to himself.

“His right there was none to dispute.” The tuneful mosquito was, in fact, your true New Jersey aboriginal, and we do not hesitate to assert that the wilderness buzzed. But the time came at last when the wilderness of New Jersey was to have something else to do.

In the year (confound it! what year 71was it now?) a select company of colonists landed at Hoboken, led by one Philip Carteret. The latter carried with him a large supply of agricultural implements to remind the colonists that they must rely mainly upon the cultivation of cabbages, and devote their energies more or less to the manufacture of Apple Jack for their livelihood. But he soon saw his error, and immediately cabled over for a supply of mosquito nets to instill into their minds the axiom that “self-preservation is the first law of nature.”

Mr. Carteret opened a boarding house in Hoboken, to be conducted on strictly temperance principles, and devoted his leisure to the civilizing of the aborigines; but his efforts in this direction were crowned with but partial success.

72It is an historical, but not the less melancholy fact, that the aboriginal inhabitants of any country become effete as civilization advances. And thus it happens that, although the mosquito has been handed down to us in modern times, we only behold him in a modified form. That he has not yet entirely lost his sting, the compiler of this work personally ascertained during a four years’ exile in Hoboken. For all that the Jersey mosquito of to-day is but an echo, as it were, of his ancestor of colonial times. How thankful should we be then that we were not early settlers.

Hoboken is the capital of New Jersey, and is principally inhabited by Italian barons in disguise, who consecrate their lives exclusively to the study of that king of musical instruments, the barrel-organ.

The Elysian Fields, just north of Hoboken, is a sylvan retreat where the elite of the adjacent cities congregate on Sunday afternoons to play base-ball and strew peanut shells o’er the graves of departed car-horses.