Robert E. Lee: Why Some Succeed While Others Fail 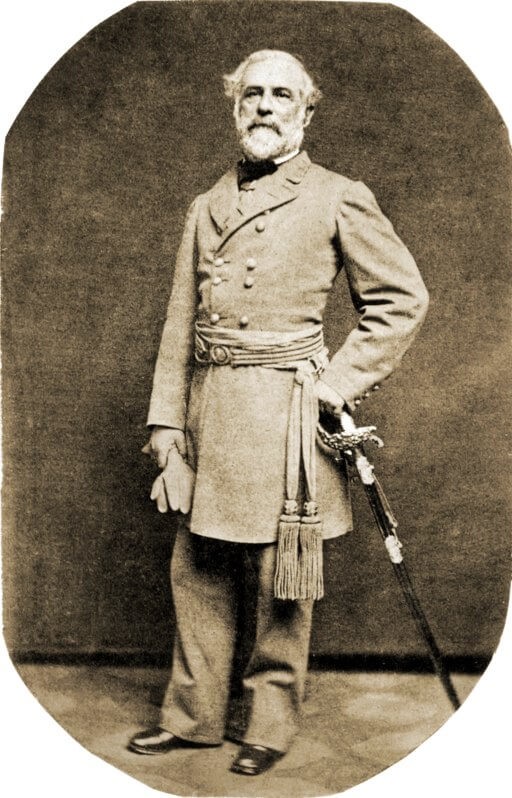 This biography of Robert E. Lee was published in Hidden Treasures: Why Some Succeed While Others Fail by H.A. Lewis in 1887. Though he came from good "fighting stock" of the Southern Confederacy, he wrote in a letter to his sister: "In my own person I had to meet the question whether I should take part against my native State. With all my devotion to the Union and the feeling of loyalty and duty of an American citizen, I have not been able to make up my mind to raise my hand against my relatives, my children, my home."

Robert E. Lee was born in Virginia, at the town of Stafford, January 19th, 1807. He was son of Colonel Henry Lee, of revolutionary fame. He had a commanding military bearing, was a most graceful horseman; he came from good "fighting stock," and as there never was a braver man drew sword, he was well calculated to become the beau-ideal of the Southern Confederacy.

When eighteen years of age he entered the military academy at West Point, where, after a four years' course, he graduated. One thing, General Lee, as a cadet, was an example well worthy of imitation, as he, during his whole four years' course, never received a reprimand, and graduated second only to one in his class. From 1829 until 1834, he served as assistant engineer in the building of forts in the South, and later was assistant astronomer; aiding in determining the boundary of Ohio. When the Mexican war broke out he was appointed chief engineer for the army under General Scott.

During this war he served with great distinction, being successively breveted major, lieutenant-colonel and colonel, and was wounded once; certain it is that Robert E. Lee gave ample proof of his ability in the Mexican war. In the interim between the Mexican and Civil wars he served his country in various ways, being for some three years superintendent of the West Point Military Academy.

In 1855 two new regiments were formed. Of the second regiment Albert Sidney Johnson was made colonel; Lee, lieutenant-colonel; Hardee and Thomas, majors; Van Dorn and Kirby Smith, captains; among the lieutenants were Stoneman and Hood. One can see that the officers of that regiment were composed of men of no small calibre. When Lincoln was elected Lee was in Texas, but he obtained a leave of absence and hurried to his home in Virginia. General Lee was held in very high esteem by General Scott, who was then at the head of all the Union armies. General Scott was getting very old, too old for active service, and it is stated that he felt strongly inclined to name Lee as his successor, but Lee had other views on the question and he joined his fortune with that of the South.

Perhaps a letter written to his sister will more clearly portray Lee's convictions and motives at the breaking out of hostilities than anything that can be found elsewhere in history:—"The whole South is in a state of revolution into which Virginia has been drawn after a long struggle; and though I recognize no necessity for this state of things and would have forborne and pleaded to the end for redress of grievances, real or supposed, yet in my own person I had to meet the question whether I should take part against my native State. With all my devotion to the Union and the feeling of loyalty and duty of an American citizen, I have not been able to make up my mind to raise my hand against my relatives, my children, my home."

These were the words of General Lee to his sister. The idea of certain power reserved from the "central power," as they termed it, had been inculcated since Jefferson and Madison drew up the Kentucky and Virginia resolution in 1798. Upon these did Calhoun claim authority to rest justified when he fostered the idea of State Rights. Had it not been for a sudden wave of popular politics which swept Jefferson into power it might have been Thomas Jefferson or James Madison who would have been known in history as the author of the Nullification Acts which did not come until Calhoun's day.

This doctrine had been taught in the South for several generations, and had enlarged with rolling. The profitable use of slaves helped to sustain it, and it is no wonder, to a careful observer, that these people were carried away by rebellion, when he takes into consideration these things, the characteristics of the people, etc. As it was with Lee, so it was with the South, and despite assertions to the contrary, we believe that Robert E. Lee was sincere, and not looking after glory any more than other officers of recognized ability, who cast their fortunes with the North.

Then, too, Lee gained his position at the head of the Southern army only after one general had been killed, another wounded, and another stricken with a paralytic stroke; he coming fourth in order.

On June 3d, 1862, Lee received his commission, and immediately launched out upon a series of battles known as the seven-days battle, in which he succeeded in driving McClellan from before Richmond. Pope was now placed in command of the Union forces, and Lee signally defeated him in the second battle of Bull Run. Now he attempted his first invasion of the North, and was forced back in the battle of Antietam. Retreating into Virginia, he massed his forces at Fredericksburg. The North being dissatisfied with the slow manner in which McClellan was following Lee, placed Burnside in command, who attacked Lee in his position, but was signally repulsed by the Confederates. He next met Hooker at Chancellorsville, and again success attended the standard of Lee.

Flushed with the great victories of Fredericksburg and Chancellorsville, Lee once more started on an invasion of the North. Meade was now put at the head of the Union forces, who at once started in pursuit. They met at Gettysburgh, Pennsylvania. Three long days of terrible fighting resulted in the repulse of Lee, and he retreated south in good order. When he reached the Potomac he found it impassable. If Meade had followed Lee up now he might have gained a glorious victory, but he allowed Lee to escape into Virginia.

General Grant was now placed at the head of the Union forces and Lee found he had other metal with which to deal. Grant was not only made of different material but he could profit by the experience of his predecessors. Then, too, Grant had the great resources of the North behind him and the confidence of President Lincoln. Lee could never replace the 30,000 veterans lost at Gettysburg, but Grant could lose later 80,000 and the government was amply able to replace three times that number. Grant now commenced to starve Lee out, to wear the Confederacy threadbare. The history of the war from now until the close of the war is a series of flanking movements carried on by two most skillful generals. At last Lee was obliged to surrender on the 9th of April, 1865.

After the war he became president of Washington and Lee University, his great popularity and good management gaining for it a large patronage. He died on the 12th of October, 1870.

Enjoy reading more about General Lee, Ulysses S. Grant, and Abraham Lincoln in American History and in our collection of Civil War Stories.