General Grant and the Vicksburg Campaign 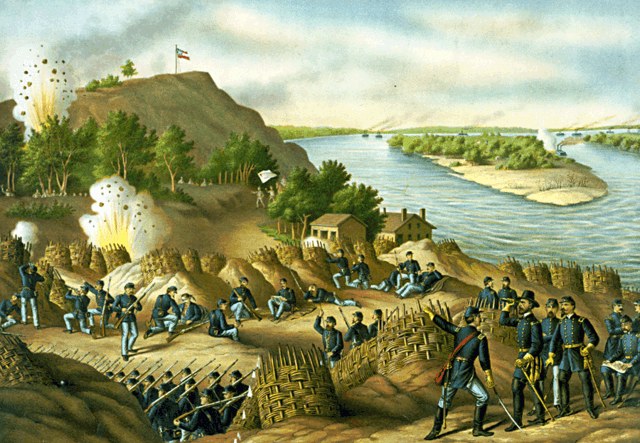 This story about Ulysses S. Grant was excerpted from Hero Tales from American History, co-authored by Henry Cabot Lodge, and Theodore Roosevelt in 1895.

On January 29, 1863, General Grant took command of the army intended to operate against Vicksburg, the last place held by the rebels on the Mississippi, and the only point at which they could cross the river and keep up communication with their armies and territory in the southwest. It was the first high ground below Memphis, was very strongly fortified, and was held by a large army under General Pemberton. The complete possession of the Mississippi was absolutely essential to the National Government, because the control of that great river would cut the Confederacy in two, and do more, probably, than anything else, to make the overthrow of the Rebellion both speedy and certain.

The natural way to invest and capture so strong a place, defended and fortified as Vicksburg was, would have been, if the axioms of the art of war had been adhered to, by a system of gradual approaches. A strong base should have been established at Memphis, and then the army and the fleet moved gradually forward, building storehouses and taking strong positions as they went. To do this, however, it first would have been necessary to withdraw the army from the positions it then held not far above Vicksburg, on the western bank of the river. But such a movement, at that time, would not have been understood by the country, and would have had a discouraging effect on the public mind, which it was most essential to avoid. The elections of 1862 had gone against the government, and there was great discouragement throughout the North. Voluntary enlistments had fallen off, a draft had been ordered, and the peace party was apparently gaining rapidly in strength. General Grant, looking at this grave political situation with the eye of a statesman, decided, as a soldier, that under no circumstances would he withdraw the army, but that, whatever happened, he would "press forward to a decisive victory." In this determination he never faltered, but drove straight at his object until, five months later, the great Mississippi stronghold fell before him.

Efforts were made through the winter to reach Vicksburg from the north by cutting canals, and by attempts to get in through the bayous and tributary streams of the great river. All these expedients failed, however, one after another, as Grant, from the beginning, had feared that they would. He, therefore, took another and widely different line, and determined to cross the river from the western to the eastern bank below Vicksburg, to the south. With the aid of the fleet, which ran the batteries successfully, he moved his army down the west bank until he reached a point beyond the possibility of attack, while a diversion by Sherman at Haines' Bluff, above Vicksburg, kept Pemberton in his fortifications. On April 26, Grant began to move his men over the river and landed them at Bruinsburg. "When this was effected," he writes, "I felt a degree of relief scarcely ever equaled since. Vicksburg was not yet taken, it is true, nor were its defenders demoralized by any of our previous movements. I was now in the enemy's country, with a vast river and the stronghold of Vicksburg between me and my base of supplies, but I was on dry ground, on the same side of the river with the enemy."

The situation was this: The enemy had about sixty thousand men at Vicksburg, Haines' Bluff, and at Jackson, Mississippi, about fifty miles east of Vicksburg. Grant, when he started, had about thirty-three thousand men. It was absolutely necessary for success that Grant, with inferior numbers, should succeed in destroying the smaller forces to the eastward, and thus prevent their union with Pemberton and the main army at Vicksburg. His plan, in brief; was to fight and defeat a superior enemy separately and in detail. He lost no time in putting his plan into action, and pressing forward quickly, met a detachment of the enemy at Port Gibson and defeated them. Thence he marched to Grand Gulf, on the Mississippi, which he took, and which he had planned to make a base of supply. When he reached Grand Gulf, however, he found that he would be obliged to wait a month, in order to obtain the reinforcements which he expected from General Banks at Port Hudson. He, therefore, gave up the idea of making Grand Gulf a base, and Sherman having now joined him with his corps, Grant struck at once into the interior. He took nothing with him except ammunition, and his army was in the lightest marching order. This enabled him to move with great rapidity, but deprived him of his wagon trains, and of all munitions of war except cartridges. Everything, however, in this campaign, depended on quickness, and Grant's decision, as well as all his movements, marked the genius of the great soldier, which consists very largely in knowing just when to abandon the accepted military axioms.

Pressing forward, Grant met the enemy, numbering between seven and eight thousand, at Raymond, and readily defeated them. He then marched on toward Jackson, fighting another action at Clinton, and at Jackson he struck General Joseph Johnston, who had arrived at that point to take command of all the rebel forces. Johnston had with him, at the moment, about eleven thousand men, and stood his ground. There was a sharp fight, but Grant easily defeated the enemy, and took possession of the town. This was an important point, for Jackson was the capital of the State of Mississippi, and was a base of military supplies. Grant destroyed the factories and the munitions of war which were gathered there, and also came into possession of the line of railroad which ran from Jackson to Vicksburg. While he was thus engaged, an intercepted message revealed to him the fact that Pemberton, in accordance with Johnston's orders, had come out of Vicksburg with twenty-five thousand men, and was moving eastward against him. Pemberton, however, instead of holding a straight line against Grant, turned at first to the south, with the view of breaking the latter's line of communication. This was not a success, for, as Grant says, with grim humor, "I had no line of communication to break"; and, moreover, it delayed Pemberton when delay was of value to Grant in finishing Johnston. After this useless turn to the southward Pemberton resumed his march to the east, as he should have done in the beginning, in accordance with Johnston's orders; but Grant was now more than ready. He did not wait the coming of Pemberton. Leaving Jackson as soon as he heard of the enemy's advance from Vicksburg, he marched rapidly westward and struck Pemberton at Champion Hills. The forces were at this time very nearly matched, and the severest battle of the campaign ensued, lasting four hours. Grant, however, defeated Pemberton completely, and came very near capturing his entire force. With a broken army, Pemberton fell back on Vicksburg. Grant pursued without a moment's delay, and came up with the rear guard at Big Black River. A sharp engagement followed, and the Confederates were again defeated. Grant then crossed the Big Black and the next day was before Vicksburg, with his enemy inside the works.

When Grant crossed the Mississippi at Bruinsburg and struck into the interior, he, of course, passed out of communication with Washington, and he did not hear from there again until May 11, when, just as his troops were engaging in the battle of Black River Bridge, an officer appeared from Port Hudson with an order from General Halleck to return to Grand Gulf and thence cooperate with Banks against Port Hudson. Grant replied that the order came too late. "The bearer of the despatch insisted that I ought to obey the order, and was giving arguments to support the position, when I heard a great cheering to the right of our line, and looking in that direction, saw Lawler, in his shirt-sleeves, leading a charge on the enemy. I immediately mounted my horse and rode in the direction of the charge, and saw no more of the officer who had delivered the message; I think not even to this day." When Grant reached Vicksburg, there was no further talk of recalling him to Grand Gulf or Port Hudson. The authorities at Washington then saw plainly enough what had been done in the interior of Mississippi, far from the reach of telegraphs or mail.

As soon as the National troops reached Vicksburg an assault was attempted, but the place was too strong, and the attack was repulsed, with heavy loss. Grant then settled down to a siege, and Lincoln and Halleck now sent him ample reinforcements. He no longer needed to ask for them. His campaign had explained itself, and in a short time he had seventy thousand men under his command. His lines were soon made so strong that it was impossible for the defenders of Vicksburg to break through them, and although Johnston had gathered troops again to the eastward, an assault from that quarter on the National army, now so largely reinforced, was practically out of the question. Tighter and tighter Grant drew his lines about the city, where, every day, the suffering became more intense. It is not necessary to give the details of the siege. On July 4, 1863, Vicksburg surrendered, the Mississippi was in control of the National forces from its source to its mouth, and the Confederacy was rent in twain. On the same day Lee was beaten at Gettysburg, and these two great victories really crushed the Rebellion, although much hard fighting remained to be done before the end was reached.

Grant's campaign against Vicksburg deserves to be compared with that of Napoleon which resulted in the fall of Ulm. It was the most brilliant single campaign of the war. With an inferior force, and abandoning his lines of communication, moving with a marvelous rapidity through a difficult country, Grant struck the superior forces of the enemy on the line from Jackson to Vicksburg. He crushed Johnston before Pemberton could get to him, and he flung Pemberton back into Vicksburg before Johnston could rally from the defeat which had been inflicted. With an inferior force, Grant was superior at every point of contest, and he won every fight. Measured by the skill displayed and the result achieved, there is no campaign in our history which better deserves study and admiration.