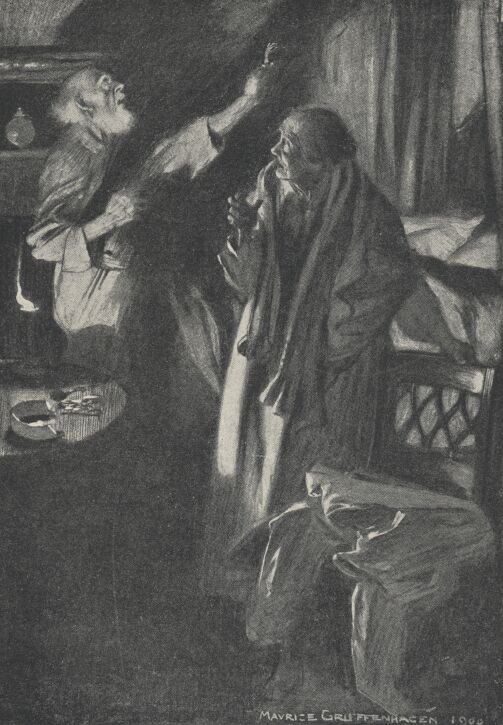 Don't underestimate the power of magic! The Monkey's Paw (1902) by W.W. Jacobs is a cautionary tale about the evil that can result from tempting fate. We hope it is particularly useful for teachers and students studying the story.

White family - Mr. and Mrs. White and their son Herbert are the main characters in the story. They retrieve a magical talisman from their visiting friend, Sergeant-Major Morris. Despite his warnings, they use it.

Sergeant-Major Morris - A family friend who served in India in the British Army, he attempts to put an end to the horrifying experiences using the paw by throwing it in the White's fireplace.

Monkey's Paw - The true protagonist of the story, a magical talisman is in the form of a mummified monkey's paw that has the power to grant its host three wishes.

The story is set in England at the home of the White family, during a dark and stormy night (of course!). Their guest, Sargeant-Major Morris who returned from his post in India, tells them about the power of a mummfiied monkey's paw he brought back with him that a Fakir put a spell on, granting its guardian three wishes. He warns the family that while the wishes are always granted, "I warn you of the consequences." He implies that the wishes are always accompanied by a punishment for tampering with fate. Morris throws the paw into the fire, trying to destroy its evil forces once and for all, but Mr. White retrieves it, and the Whites decide to use the paw.

The family's first wish is Herbert's: he asks for enough money to make the final mortgage payment (200 pounds). The next day, Herbert goes to work and is killed at the local factory in a horrible accident. His employer refuses to claim responsibility, but makes a goodwill settlement of exactly...(you guessed it) 200 pounds. Though horrified by the mutilated outcome of their first wish being granted, Mrs. White talks her reluctant husband into a second wish: asking for Herbert to come back to life. There are three dramatic knocks on the door, Mrs. White fumbles down the stairs and with the door chain; meanwhile Mr. White is able to grasp the talisman just in time for one final wish, which is... [Read the story, we're not going to tell you!] 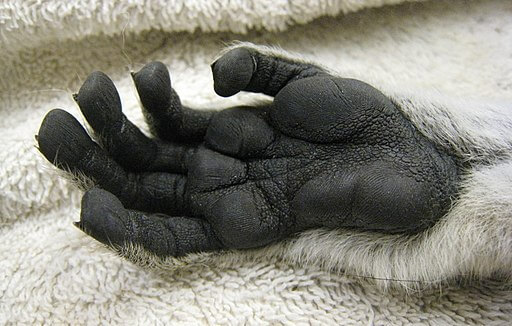 W.W. Jacobs' story is in the genre of Gothic Literature, sub-genre of supernatural horror.

Leave fate alone: Things happen for a reason, to wish them to occur otherwise will result in punishment far greater than the pain any "natural" losses may cause.

Magic does harm: Mystic or spiritual beings can "charge" a talisman to do harm upon those greedy enough to interfere with fate. Magical forces rarely work the way people want them to. 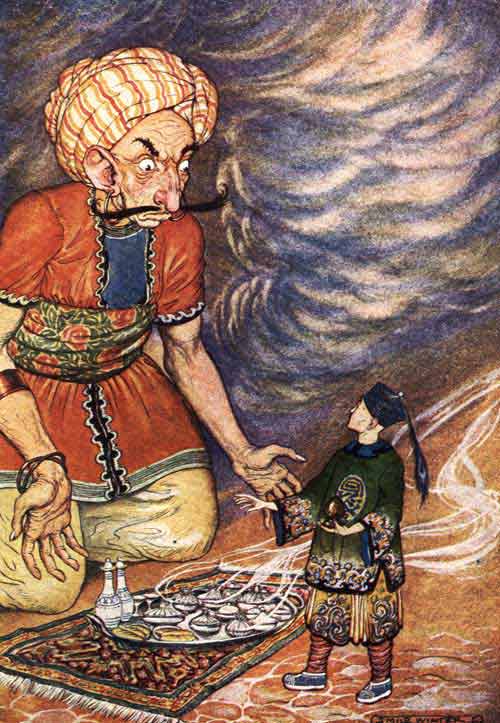 Monkey's Paw: The talisman symbolizes desire and greed, the evil that comes from tempting fate.

The Rat: Associated with decay and death, and Herbert's fate. Mr. White claims a rat passes by him on the stairs, while the couple fumbles to respond to the three knocks at the front door, a fearful premonition of their dead son returning in a decaying, rotting state, having been buried ten days earlier.

Familiar and unsettling: Aladdin and the Wonderful Lamp is an important literary reference by Mrs. White early in the story, foreshadowing the destruction that is to come:

"'Hold it up in your right hand, and wish aloud,'" said the Sergeant-Major, 'But I warn you of the consequences.' 'Sounds like the "Arabian Nights,"' said Mrs. White, as she rose and began to set the supper. 'Don't you think you might wish for four pairs of hands for me.'"

As you probably know, The Arabian Nights is a collection of folk tales from the Middle East and South Asia, created out of desperation for survival. Shahryār (Persian king) executes his unfaithful wife and believes all women are traitorous, he marries a succession of virgins, only to execute each the next morning until there are none left except Scheherazade. She is so clever that to remain alive, she decides to tell the king a tale so captivating and suspenseful, he continues to postpone putting her to death night after night in order to hear the story's conclusion (after One Thousand and One Nights). 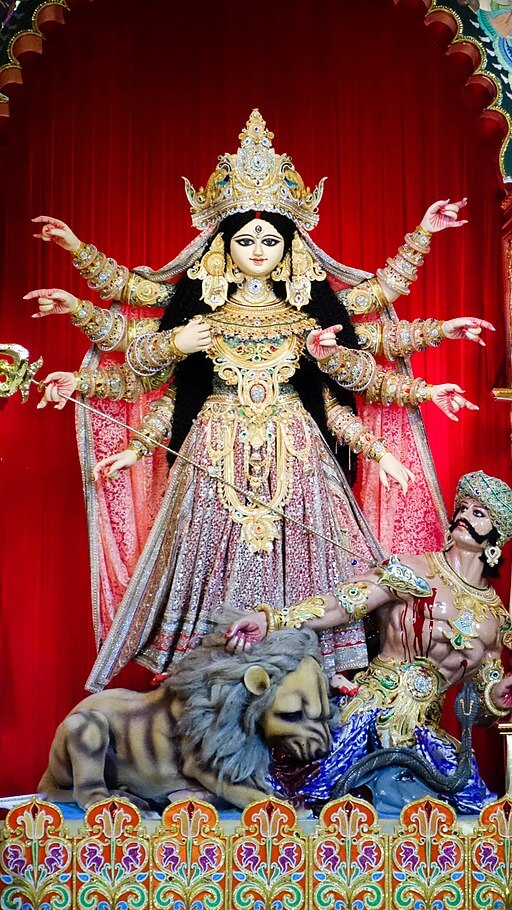 Why does W.W. Jacobs throw this literary allusion into his story? First, we think of having wishes granted as wonderful, like Aladdin's magic lamp in the Disney movie. But most versions of this story suggest that "happy" wishes are impossible because people can't control magic. We learn early on in The Monkey's Paw that any wishes asked of the monkey's paw will cause destruction, rather than good. The reference to Arabian Nights foreshadows desperation and greed by the White family.

Mrs. White's off-handed suggestion (sorry, that's a pun) to wish for "four pairs of hands" may reference the Hindu goddess, Durga, the protective warrior who combats evil and demonic forces. Ironically, the family would have been better off had that been one of their actual wishes! These allusions illustrate that the Whites clearly have no respect for the magical forces at work in the talisman, as we (and they) quickly discover in the story. 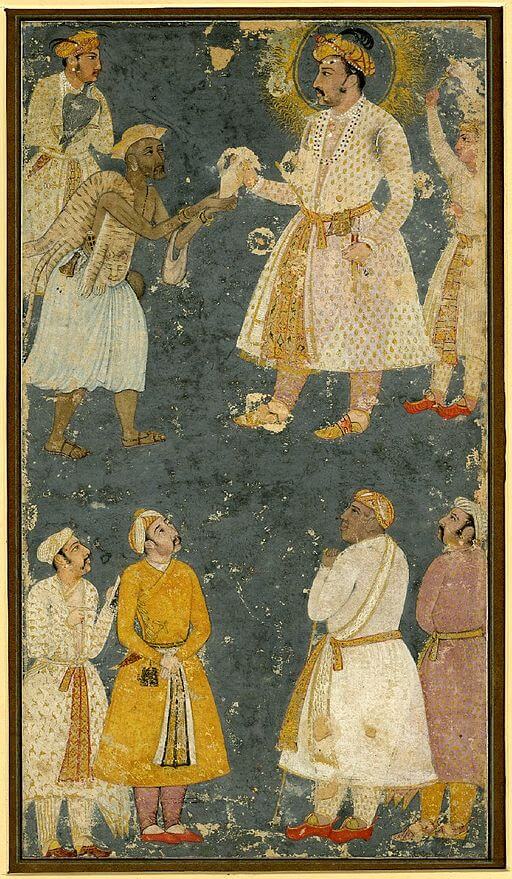 The Epigraph Sets the Tone

What's the opening quote called? First, let's rule-out an "epigram" which is a concise, short, clever saying, which this is not; neither witty nor concise. The difference between an "epitaph" and "epigraph": Both are profound quotes, poems or statements, the difference relates to where they appear. An "epitaph" is inscribed on a tombstone or plaque; an "epigraph" appears at the opening of a literary composition. In this case, the phrase at the beginning of the story is an epigraph: "Be careful what you wish for, you may receive it." --Anonymous

Jacobs' epigraph serves as a cautionary foreshadowing of the story's theme, almost a morality tale to leave things you don't understand well enough alone, or suffer the consequences.

Fakir or Faqir: Arabic term for a Muslim ascestic (someone who abstains from earthly pleasures) to focus on purely spiritual matters, often mystical. Having taken a vow of poverty, renouncing all possessions, many resided in Sufi shrines in North India. In the story, the monkey's paw is endowed with magical powers by a Fakir.

Talisman: An object charged with magical powers by a creator. It can have a specific purpose (like punishing the wishmaker).

Amulet: Though not in the story, good to know for comparison. An object that has natural magical properties, and can be used for general purposes like protection, attracting good luck. (The White family needed an amulet to protect them from the evil talisman!)

"'To look at,' said the Sergeant-Major, fumbling in his pocket, 'it's just an ordinary little paw, dried to a mummy.'"

"'The first man had his three wishes. Yes,' was the reply, 'I don't know what the first two were, but the third was for death. That's how I got the paw.'"

"'Bring him back,' cried the old woman, and dragged him towards the door. 'Do you think I fear the child I have nursed?'"

"The talisman was in its place, and a horrible fear that the unspoken wish might bring his mutilated son before him ere he could escape from the room seized up on him, and he caught his breath as he found that he had lost the direction of the door. His brow cold with sweat, he felt his way round the table, and groped along the wall until he found himself in the small passage with the unwholesome thing in his hand."

"But her husband was on his hands and knees groping wildly on the floor in search of the paw. If only he could find it before the thing outside got in. A perfect fusillade of knocks reverberated through the house, and he heard the scraping of a chair as his wife put it down in the passage against the door. He heard the creaking of the bolt as it came slowly back, and at the same moment he found the monkey's paw, and frantically breathed his third and last wish." 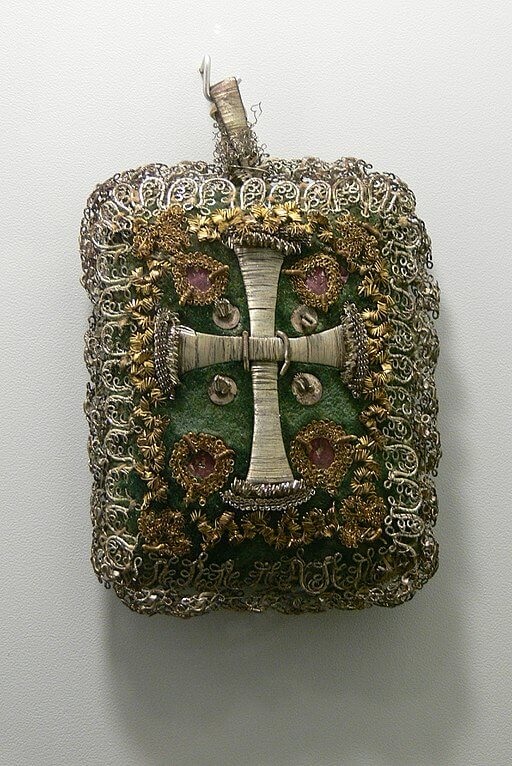 1. What is the meaning of the epigraph and how does it relate to the themes of the story? Discuss "tempting fate."

2. Why did the Sergeant-Major bother holding on to the monkey's paw after the terror it caused him? Why doesn't Jacobs reveal the details of his wish to the reader?

3. Describe the superstitious symbolism of three's: three people being granted three wishes, three people in the White family, three knocks at the door.

4. Explain why the couple reluctantly decides to use the second wish to bring back their son, given their experience with the first wish.

5. What does the wife's fumbling at the door and trouble reaching the bolt symbolize?

6. What was Mr. White's third wish, and why does Jacobs leave it to the reader to figure it out?

7. The Story of Aladdin features a magical talisman in the form of a lamp. Compare and contrasts its role in Aladdin's fate, compared to the Whites' in this story.

8. Identify Jacobs' use of literary allusions to heighten suspense and fear in the reader.

9. Why does Jacobs suppress information about the third and final wish? What is the affect of this omission on the reader?

10. Discuss what story elements are particularly conducive to a supernatural movie adaptation, particularly the evil that comes from tempting fate. What music would you use?

11. If you were given the monkey's paw, would you ask for three wishes? If so, what would they be (to avoid tempting fate). If not, are you sure you wouldn't be tempted?

Essay prompt: Take it from here... if you were to continue writing the story, what would happen to the talisman? Who might stumble upon it and to what end? What becomes of Mr. and Mrs. White? Would you revisit the Fakir in India who set the curse on the paw? 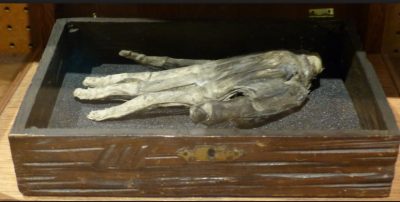 Compare and contrast the themes and supernatural elements in The Monkey's Paw with:

Nathaniel Hawthorne's The Ambitious Guest share themes of tempting fate, and a premonition for destruction.

H.G. Wells's The Stolen Body, compare their supernatural elements, the pineal eye versus a talisman

You Choose: Pick a gothic story by a different author (try one of our Halloween Stories) and compare its genre, theme & literary elements of terror with The Monkey's Paw.

Movie tie-in: Watch the 2011 movie short, The Monkey's Paw, compare the story's impact as a movie versus a short story. Which is scarier, why? 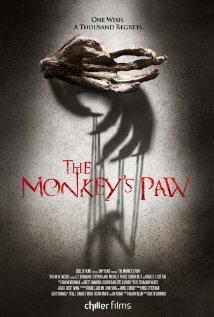 Literary Allusions in The Monkey's Paw

Gothic Literature and its Origins