The Lady, or the Tiger? - Study Guide

Talk about a no-win situation: Frank Stockton's The Lady, or the Tiger? (1882) is a fairy tale and fascinating allegory. We hope our study guide is particularly useful for teachers and students to fully appreciate the story's quandary and its themes. It's a great persuasive writing prompt.

The King - The semi-barbaric ruler, who enjoys administering justice by chance, in which the person on trial must blindly choose their fate, whether to die or live with a determined outcome.

The Princess - The King's daughter falls in love with a young man, who, once her father learns of their affair, subjects him to a perilous fate in which he must choose one of two doors. Behind one holds a tiger, who will eat him; the other hides a young maiden whom he must marry. The Princess, who is semi-barbaric as is her father, knows which door hides each creature, and signals the young man to pick the door on the right. Will she show her barbaric side (being impetuous and jeolous), or her humane side (allow her lover to live, but be with another). The reader is left to guess her decision.

The Young Man - The handsome and brave courtier loves the Princess, but when his intentions are discovered by the King, he is subject to the worst punishment of all, a public demonstration of his fate in which he faces either certain death, or is forced to marry a maiden, rather than his beloved Princess.

The Lady - The lovely young maiden who waits behind one of the doors and would be the Young Man's bride if he chooses her door, is hated by the Princess.

Plot Summary: The story is set in a kingdom ruled by a semi-barbaric king, who rules calmly and wisely for certain things, but relishes public trials of chance to administer justice for things he cares about, primarly for his own pleasure. 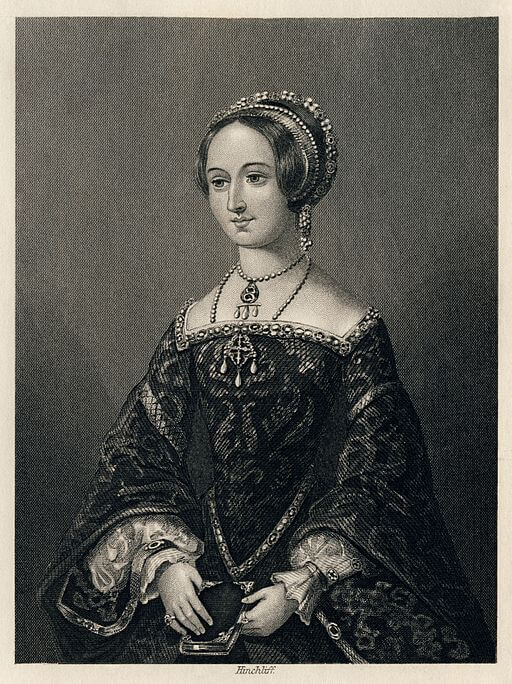 The Lady, or the Tiger? is in the genre of fairy tale, rather than a short story, with the sub-genre of allegory. It has two levels of meaning: the first is the story itself, the second is its symbolic meaning and lessons it offers the reader.

Determinism versus Free Will (alternatively, Fate versus Choice) Since the King presents an out-of-their control, no-win "choice" for the Young Man (determinism), he and the Princess cannot pursue their love for eachother (free will). Ironically, the Princess can exercise free will deciding the fate of her lover, since she knows the secret of what's behind each door and can choose his fate.

Barbarism versus Progressiveness - Stockton emphatically described the King as "semi-barbaric" in his self-serving desires and "exuberant fancy" for public spectacles of cruelty (barbarism). Yet he has a "civilized" side in his commitment to administer justice in an impartial and incorruptible manner by chance, and "develop the mental energies of the people."

Trust versus Betrayal - Though the Princess seems to be deeply in love with the young man, and he trusts her with his life, she is faced with two opposing emotions: jealousy and hatred for the young maiden if her lover survives, or mortal anguish should he be devoured by a Tiger. We learn she has deliberated long and hard over both outcomes. The reader is given more clues that she's leaning towards the Tiger-door option (her barbaric half). 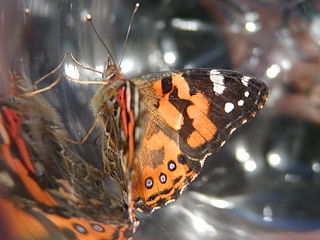 Love it, set it free

Covet versus True Love - If the reader is pulling for her civilized half, she might opt for the sentimental (butterfly) option: "If you love something, set it free." Wait, would this mean he's "free" to love the maiden? Clearly, it's an unsolvable problem for the Princess, consuming all her energy. Either result is a tragic loss for her. Ironically, the courtier has absolute trust in her decision, whichever it may be. 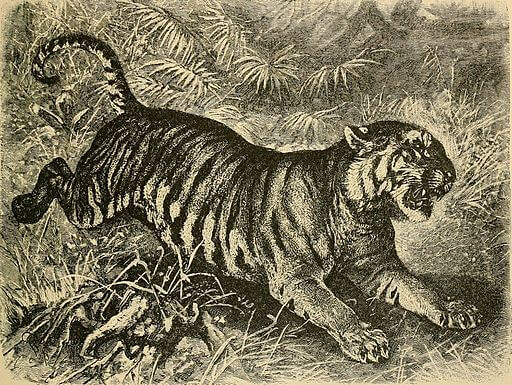 Suppressed ending: Stockton uses the literary device of supressing the ending to create suspense for the reader, which creates more questions than answers. Just as the Princess deliberates on the "right" choice to guide her lover to his fate, the reader is left guessing, and wresting with terrible outcomes (particularly for the Princess). The problem described in his tale has become a literary expression meaning an unsolvable or impossible problem to solve. "Which will it be, the lady or the tiger?"

Symbols: Stockton writes an allegory, two levels of meaning, in which the deeper level is represented by symbols. The doors represent fate, the tiger represents death and punishment, the lady symbolizes innocence and reward (it's not her fault she's lovely and the Princess is jealous). "Doleful iron bells" represent mourning, while "gay brass bells" represent celebration and life. Stockton's symbols help readers broaden their appreciation for the deeper level of the story's meaning, and perhaps relate it to their own life lessons.

Semi-barbaric: Half savage or uncivilized, brutal and cruel, the other half civilized or "not quite" barbaric. It's a confusing juxtaposition, which makes it a perfect adjective to describe the King and the Princess.

Barleycorn: While literally a grain of barley or unit of measurement based on the length of the grain, Stockton's description: "...every barleycorn a king, knew no tradition to which he owed more allegiance than pleased his fancy" may also be a reference to an ancient British folksong personifying the ill-fated: John Bar-Ley-Corn

Choristers: A member of a choir, or someone leading singing, used in the story to describe a "good" outcome: "Another door opened beneath the king, and a priest, followed by a band of choristers' and dancing maidens blowing joyous airs on golden horns and treading an measure."

Moiety: Each of two parts (another reference to semi-barbaric): "Had it not been for the moiety of barbarism in her nature, it is probable that lady would not have been there." 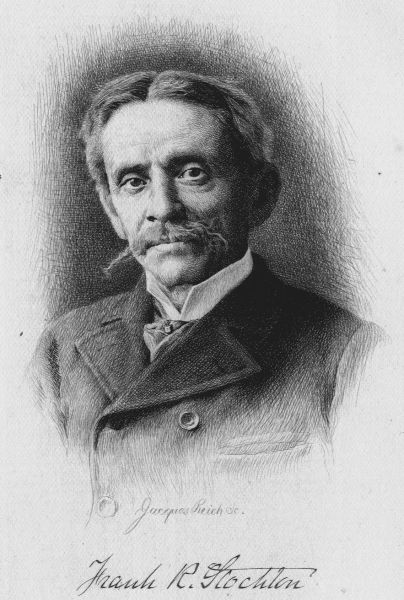 "He was a man of exuberant fancy, and, withal, of an authority so irresistible that, at his will, he turned his varied fancies into facts. He was greatly given to self-communing; and, when he and himself agreed upon any thing, the thing was done."

"The arena of the king was built, not to give the people an opportunity of hearing the rhapsodies of dying gladiators, nor to enable them to view the inevitable conclusion of a conflict between religious opinions and hungry jaws, but for purposes far better adapted to widen and develop the mental energies of the people. This vast amphitheatre, with its encircling galleries, its mysterious vaults, and its unseen passages, was an agent of poetic justice, in which crime was punished. Or virtue rewarded, by the decrees of an impartial and incorruptible chance."

"The moment that the case of the criminal was thus decided, doleful iron bells were clanged, great wails went up from the hired mourners posted on the outer rim of the arena, and the vast audience, with bowed heads and downcast hearts, wended slowly their homeward way, mourning greatly that one so young and fair, or so old and respected, should have merited so dire a fate."

"The decisions of this tribunal were not only fair, they were positively determinate: the accused person was instantly punished if he found himself guilty; and, if innocent, he was rewarded on the spot, whether he liked it or not. There was no escape from the judgments or the king's arena."

"Among his courtiers was a young man of that fineness of blood and lowness of station common to the conventional heroes of romance who love royal maidens. This royal maiden was well satisfied with her lover, for he was handsome and brave to a degree unsurpassed in all this kingdom; and she loved him with an ardor that had enough of barbarism in it to make it exceedingly warm and strong."

"He had loved the Princess, and neither he, she, nor any one else thought of denying the fact; but the king would not think of allowing any fact of this kind to interfere with the workings of the tribunal, in which he took such great delight and satisfaction."

"Possessed of more power, influence, and force of character than any one who had ever before been interested in such a case, she had done what no other person had done,--she had possessed herself of the secret of the doors."

"It was one of tile fairest and loveliest of the damsels of the court who had been selected as the reward of the accused youth, should he be proved innocent of the crime of aspiring to one so far above him; and the Princess hated her."

"She raised her hand, and made a slight, quick movement toward the right. No one but her lover saw her."

"Think of it, fair reader, not as if the decision of the question depended upon yourself, but upon that hot-blooded, semi-barbaric Princess, her soul at a white heat beneath the combined fires of despair and jealousy. She had lost him, but who should have him?" 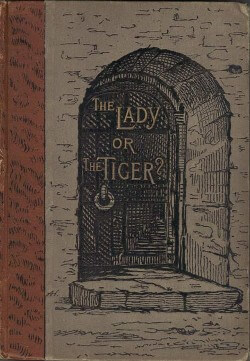 1. Explain the meaning of "semi-barbaric" and why it's a perfect adjective to describe both the King and the Princess. How can someone be half cruel, brutal and uncivilized, and half not?

2. Stockton begs the question: "Which came out of the opened door,--the lady, or the tiger?" Write a persuasive argument for which choice the Princess ended up making, and why.

3. Explain why this situation poses an unsolvable problem.

4. Determinism versus Free Will is one of the story's themes. Explain both concepts as revealed in this tale."

5. Think of this tale from the young man's point of view, if he could choose. If he was a Romantic, might he die rather than lose his true love? Or, is he a Realist, settling for survival with a fair maiden? Sure beats being dead.

6. Using the literary device of allegory, the story has two layers of meaning. Explain each layer and what the symbols represent.

7. Relate the concept of "fate" to a situation in your own life where a "choice" wasn't really up to you. Have you ever had to make a "lady or the tiger?" decision?

8. Read the sequel to this story, The Discourager of Hesitancy, and compare the King's "choice" offered to a visiting prince requesting a wife, with the young man's in this story.

9. Think of a story, book, or movie in which the ending was withheld, leaving the reader or audience to determine the ending, or guessing what happens next. (Can't think of one? Try the Harry Potter series). Discuss why this is an appealing technique to keep us coming back for more? 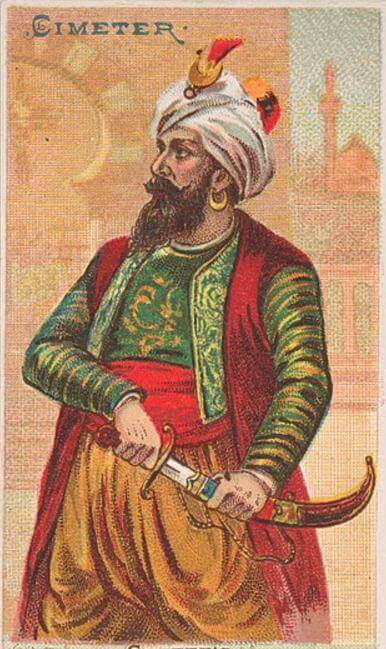 The Discourager of Hesitancy

Compare The Lady, or the Tiger? themes and literary devices to these stories:

The Discourager of Hesitancy, the story's sequel, in which the reader eagerly hopes to discover which fate the Princess chose for her lover in the first story.

The Monkey's Paw by W.W. Jacobs, which shares the literary device of a dramatically suppressed ending, leaving the reader to figure it out.

The Most Dangerous Game by Richard Connell, another story with an impossible "choice"-- both of deadly consequence.

The Cunning Little Tailor by The Brothers Grimm, compare the riddling Princess, and whether both stories share aspects of the fairy tale genre.

Choose one of these Morality Tales and compare its lesson to this story. 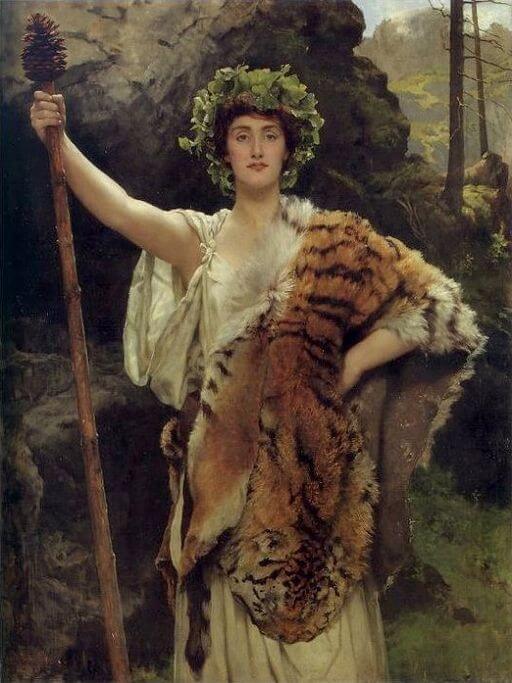 Biography and Works by Frank Stockton

Lesson Plans and Activities for The Lady, or the Tiger?

Barbarism and Civilization in The Lady, or the Tiger?