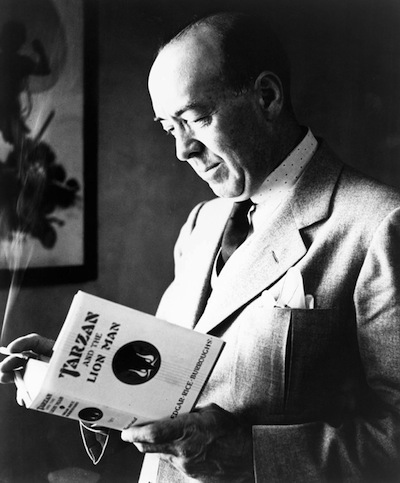 Edgar Rice Burroughs, an American author born in Chicago in 1875, is best known for his creation of the jungle character, Tarzan and his heroic Mars adventurer, John Carter. Burroughs' most acclaimed novels are Tarzan of the Apes (1912) and The Gods of Mars (1914). We feature his works in our Science Fiction Study Guide and Dystopian Stories.

Burroughs was sent to his brother's ranch in Idaho during the Chicago influenza epidemic in 1891. He attended the Phillips Academy in Andover, Massachusetts, then the Michigan Military Academy, but he failed to gain entrance to West Point and was discharged from the Army after being diagnosed with a heart problem in 1897. He worked as a pencil sharpener wholesaler after several years of low income jobs, then began to write fiction in 1911. He had a lot of spare time on his hands, and took up reading pulp fiction magazines. He observed,

Burroughs married and had two children. His daughter eventually married Tarzan film actor James Pierce. No her name was not Jane, but "Joan."

Burroughs was buried in Tarzana, California, in 1950.