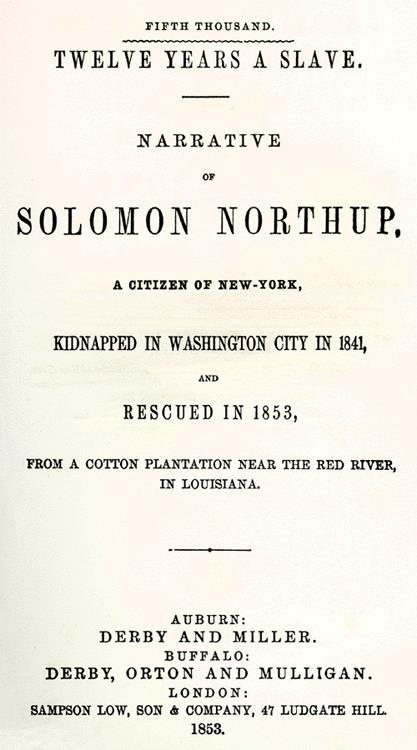 The 2014 Oscar winning film for Best Picture, “12 Years a Slave," is based upon the true-life story of Solomon Northup. His memoir, Twelve Years a Slave, was published in 1853 and details the deception that got him kidnapped and sold into slavery, as well as the years he spent on Southern Plantations.

I am very fond of the intersection of literature and history and believe we can learn a great deal from those occasions where the two meet, especially when the occasion plays a part in changing the direction of the country. I do hope that movie fans are coming here to explore and learn from the actual text. Because, as usual, Hollywood took some liberties, adding embellishments in some places and sacrificing the truth in others. The more accurate account is found in the actual text (do note that the original text has some irregularities and they are presented here without correction).

In historical context, 1853 predates the American Civil War by eight years. The Lincoln-Douglas debates are still five years in the future, and importantly Harriet Beecher Stowe’s Uncle Tom's Cabin; or, Life Among the Lowly was published the year before on March 20, 1852, fueling the abolitionist movement that would eventually lead to Abraham Lincoln’s Emancipation Proclamation.

The historical significance of Northup’s memoir should be well noted and understood. While Beecher Stowe had pricked the conscience of the country with Uncle Tom’s Cabin, it was Northup’s memoir that filled in the details. Stowe had presented much of the high level outline, but it was Northrup who stepped in to fill in the details and add the bullet points that were missing. His true-life account also added the power of truth and veracity to Uncle Tom’s Cabin, making it much more difficult to dismiss that book as an exaggerated work of fiction. Northup, of course, understood the context in which he was operating, and dedicated his text to Harriet Beecher Stowe and her novel Uncle Tom’s Cabin.

Twelve Years a Slave is a book that absolutely inhabits the intersection of American History and American Literature, and should be read and understood in that context. I would also like to draw the reader's attention to some fine short stories treating with the difficult subject matter of America’s racial history. One excellent story is "The Passing of Grandison" by the African American writer Charles Chesnutt. The second is a superb short story by Kate Chopin entitled "Desiree’s Baby."

Readers, students and teachers may also be interested in the African American Library collection they will find more stories, speeches and documents, and where advanced AP English students will wish to consider the symbolic interpretation of Stephen Crane’s short story, A Dark Brown Dog.

You can start reading Twelve Years a Slave by following the links below.

Return to the Solomon Northup library.